When there are so many nice set ups in the energy space.  I developed a buy screen of which all of these are already on it, but the set ups on many of these still look great.  All of these are 70% or less of their 52 week Moving Average.  Enjoy.  http://arum-geld-gold.blogspot.com

Data released yesterday morning shows that the unemployment rate in Europe spiked to a new 12-year high, as shown on the graph below.

Unemployment has been steadily rising, in spite of LTRO 1…we'll see if LTRO 2 makes any difference in due course…although, I very much doubt that it has any relevance or useful purpose in solving this growing problem. 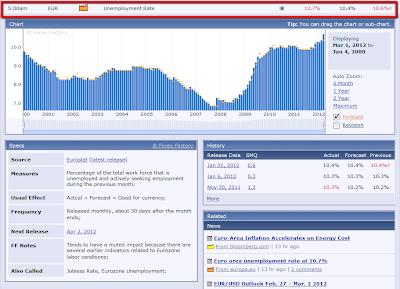 I was saying yesterday morning that the statistical odds were stacked against the bear side yesterday, and that the stats suggested that Wednesday's bearish engulfing candlestick on SPY was unlikely to confirm, which of course it didn't, in a day where most of the previous day's losses were regained. While Thursday has been the most bullish day of the week since the October low however, Friday has been the most bearish with, within a strong 300pt+ uptrend of course, 11 up closes and 9 down closes. I would note however that 5 of those up closes were in the 19-24 range, with a net 84 points made on all Fridays during this period, so overall gains on Fridays have been above the 60 point average for weekdays over this period.