I was writing up my rather mixed view on GBPUSD today for someone, and I thought I might as well post the result for general comments so here it is. 🙂

Cable is complicated and the first thing to look at is the big picture chart first to show the overall context. Overall the long term setup looks bullish as you can see from the monthly chart since 1985, unless the current support trendline from the 2009 low breaks: 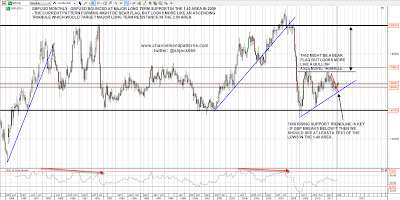 END_OF_DOCUMENT_TOKEN_TO_BE_REPLACED

Further to my last weekly market update, here is a summary of where money flow ended for Week 1 of March, 2012.

The Weekly charts below of YM, ES, NQ & TF show that the YM, ES and NQ made a higher close than the prior week on higher volumes. The ES did not close above its 2011 high of 1373.50, but made a higher closing high. The NQ broke out of and closed above its upper channel. The TF made a lower weekly close for a second consecutive week on higher volumes…it's also the only one not to have made a higher weekly close in February since Week 1…one to watch for possible continuing weakness, particularly if it breaks and holds below its uptrending lower channel and Fibonacci extension confluence level around 796.00.

END_OF_DOCUMENT_TOKEN_TO_BE_REPLACED

While this rally has been incredibly perplexing and excruciating for those who, gasp, expect markets to fluctuate, I wanted to see, statistically speaking, how out of the ordinary the run up since December 20th, 2011 has been.

Surprisingly, this type of rally is not totally out of the ordinary.  From the end of the Tech Bubble collapse, I found 11 instances of “straight shot to the moon” rallies.  The similarities of these rallies, and their subsequent corrections, are staggering.  Almost all of the durations were around the 56 trading day range (roughly two to three months), almost all posted rally gains of 13% to 17%, and almost all corrected back 4% to 7%.  Data this tightly correlated is fascinating to me.

While the bulls have had a spectacular run, this rally is historically run of the mill.  As we are approaching the end of the average time duration I will be focusing almost exclusively on the bear side of trading as the corrections were very fast and only allowed for roughly two weeks of rip roaring sell-offs.  Presented below is my data with the yellow indicating my projection for a coming correction.