The Twitter account below has 29 times as many followers as I do. I think my tweets are pretty good. And all this other account does is say "BONG BONG BONG" every hour (the quantity of bongs dependent upon the time of day).

Data released on Monday was soft for Canada and the U.S.A., most notably a decline in Canada's GDP, a rise in the U.S. Core PCE Index (which excludes food and energy…and Mr. Bernanke's been blaming the cost of gas for a rise in inflation…hmmm), and a decline in U.S. consumer spending, as shown on the graphs below. 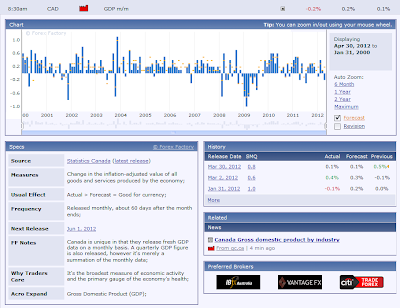 END_OF_DOCUMENT_TOKEN_TO_BE_REPLACED

BJ's Restaurants (BJRI) broke its symetric triangle on Friday, and it's starting to pay the price now. I don't have a position, but if we retrace to the underside of the broken triangle, I'll be shorting this.

Remember the "Occupy" movement? Late last summer and early in the fall, all kinds of Occupy protests popped up all over the country. Goodness, it even came to my little town!

I think back on this, because I truly believe there is an inverse correlation between public rage and the financial markets. When things are soaring (like now), the sheeple are fine to let the ultra-rich run right over them. Or, at the very least, the hippies don't get the press converage that they would otherwise.

But when the seams are starting to tear, then the public allows themselves to get pissed off at the powers that be.

END_OF_DOCUMENT_TOKEN_TO_BE_REPLACED

Today is the last day of April and with it ends the annual 6 month sweet spot for equities. That doesn't mean an imminent interim top is in the offing, but it's worth noting that late April and May are periods where such interim tops are often seen. As to the strength of this 6 months up and 6 months sideways to down pattern, it's impressively strong. I posted some stats a few weeks ago showing that $10,000 invested in the Dow since 1950 November through April only would be worth some $800,000 now, and that further $10,000 invested in the Dow since 1950 May through October only would be worth some $9,500 now. That is a very strong pattern. This is an election year though and that would moderate the effect somewhat I think.

Overnight futures are weak and I'm wondering about that retest of broken resistance on ES and NQ. NQ looks particularly interesting as it's possible that there is an IHS forming there, and NQ could retest broken resistance in the 2700 area forming a right shoulder to the pattern. I've had a few comments that we may see a bigger reversal here, and that's possible, but the bigger picture for me is the broken-up double-bottoms on various indices, and the broadening descending wedge that has broken up on NQ. These are high probability patterns and unless we see real signs of weakness here my presumption is that we will see a retest of the highs at least on SPX and NDX: