Since my last post regarding the USD and oil relationship here  I have been watching the USD with great interest.  Problem is, I see the same pattern in two different time frames and they seem to conflict with eachother.  I've added the Euro as a comparison.

Which direction will win out?  For now, the channels are intact and the longer-term lines should be expected to hold until they don't.  Together with the re-emerging bond market issues in Europe, I expect the USD to break out and the Euro to break down, but as always, we'll see.  The Euro suggests that a break is imminent while the dollar looks like it could go another month before it has to break.  Until they do, I imagine the equities markets will be choppy and a tad difficult to read.  If you're an intermediate or longer term trader, it might be safer for capital to just sit tight until these markets show their hand.

With today's Fed announcement out of the way now, we see that no new Fed monetary easing programs are underway.

Instead, the U.S. is still left with this…their growing national debt. This is something that the Fed cannot solve…it's up to the politicians, and, still, I've heard nothing this year that leads me to believe that any part of this is being tackled. Instead, it seems to be the dirt that is lingering under the carpet, never to be dealt with until, perhaps, after the November election, or, perhaps, not at all.

With issues such as declining Durable Goods Orders and Core Durable Goods orders since 2001 and 2002, respectively, as shown on the graphs below (data released on Wednesday), declining consumer optimism, and housing numbers still at 2009 recessionary lows, I would have thought that politicians would have acted more responsibly to reduce the debt while finding measures to stimulate their economy. 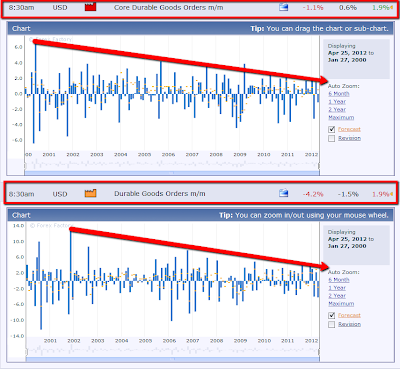