Today is the last day of April and with it ends the annual 6 month sweet spot for equities. That doesn't mean an imminent interim top is in the offing, but it's worth noting that late April and May are periods where such interim tops are often seen. As to the strength of this 6 months up and 6 months sideways to down pattern, it's impressively strong. I posted some stats a few weeks ago showing that $10,000 invested in the Dow since 1950 November through April only would be worth some $800,000 now, and that further $10,000 invested in the Dow since 1950 May through October only would be worth some $9,500 now. That is a very strong pattern. This is an election year though and that would moderate the effect somewhat I think.

Overnight futures are weak and I'm wondering about that retest of broken resistance on ES and NQ. NQ looks particularly interesting as it's possible that there is an IHS forming there, and NQ could retest broken resistance in the 2700 area forming a right shoulder to the pattern. I've had a few comments that we may see a bigger reversal here, and that's possible, but the bigger picture for me is the broken-up double-bottoms on various indices, and the broadening descending wedge that has broken up on NQ. These are high probability patterns and unless we see real signs of weakness here my presumption is that we will see a retest of the highs at least on SPX and NDX:

END_OF_DOCUMENT_TOKEN_TO_BE_REPLACED

While discussing with other Slopers our business experiences, it occurred to me that perhaps the community might benefit from a topic not directly related to markets and "trading." The purpose of this post is to perhaps help you make some significant amounts of money in a relatively short period of time. You can also become very wealthy by looking at this very hard and closely and implementing the concepts.

This will require some "out side the box" thinking on your part. The concepts presented here do NOT require capital outlay on your part! They do require a lot of creative thinking, ability to perceive and solve problems as well as the ability to get in front of decision makers and present  a plan or plans of action.

END_OF_DOCUMENT_TOKEN_TO_BE_REPLACED

Further to my last weekly market update, here is a summary of where money flow ended for Week 4 of April 2012.

The Weekly charts below of YM, ES, NQ & TF show that all four closed higher than last week's high…in fact, this week's candle on the ES, NQ & TF are "outside" bullish candles with closes very near their high…highly bullish setup. The ES closed right at the lower uptrending channel and the NQ closed above its upper channel…we'll see whether the ES can re-enter and stay within the channel to continue a rally…I'd be looking for the ES to hold above this week's high of 1403 in this regard. Otherwise, a failure at this level could send the ES down to the middle Bollinger Band at 1338. 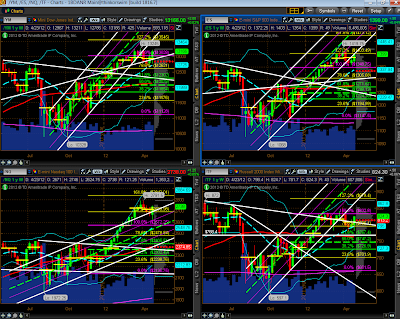