/ˌdaʊ ˈdʒoʊnz/), also called the Industrial Average, the Dow Jones, the Dow 30, or simply the Dow, is a stock market index, and one of several indices created by Wall Street Journal editor and Dow Jones & Company co-founder Charles Dow. It was founded on May 26, 1896, and is now owned by Dow Jones Indexes, which is majority owned by the CME Group. The average is named after Dow and one of his business associates, statistician Edward Jones. It is an index that shows how 30 large, publicly owned companies based in the United States have traded during a standard trading session in the stock market.[1] It is the second oldest U.S. market index after the Dow Jones Transportation Average, which was also created by Dow."

This chart shows Yearly candles…major support sits at 11,500, with major resistance at 13250 on this timeframe. 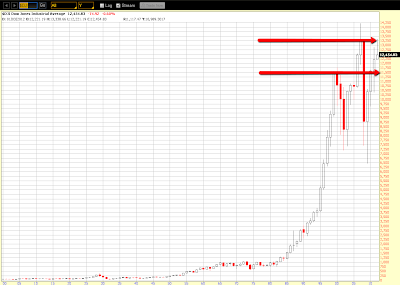