Further to my last weekly market update, here is a summary of where money flow ended for Week 5 of May 2012.

The Weekly charts below of YM, ES, NQ & TF show that they all closed lower than the prior week…on slightly higher volumes on YM & ES and on slightly lower volumes on NQ & TF. With the exception of the NQ, the others have closed below their lower Bollinger Band, their weekly 50 sma, and trendline or price support…the moving average and trendlines are now near-term resistance. The NQ is still just within its rising channel from the 2011 low. 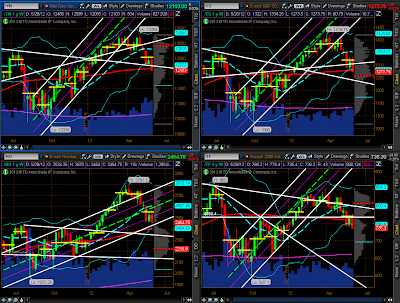 As I mentioned in my weekly market update of April 13th, I’m assigning a weekly bullish or bearish rating on YM, ES, NQ & TF until the end of the year. Please refer to that post for the parameters, and to the Weekly charts below. As of this past week’s close, the ratings for next week are as follows:

END_OF_DOCUMENT_TOKEN_TO_BE_REPLACED

Last time we looked at the costs of hedging social media stocks, I mentioned Tim's bearish post on Facebook's upcoming IPO, and a bearish article by Bloomberg, citing doubts about the company by institutional investors. The bears have so far proved prescient, of course, as Facebook's stock has continued to deflate following its fizzled IPO. But this week I spotted one Facebook bull on Twitter, early stage tech investor Dave McClure:

McClure bet 37 Signals partner David Hansson (@dhh) a beer that FB would close at $40 or above on the anniversary of its IPO. In response, I noted the high hedging costs of Facebook suggested Hansson was more likely to win that bet: