The suck part is that dozens of them got stopped out almost instantly at the opening bell, and that caused some damage. Just about the only smart thing I did today was buy a big block of GDX puts near the open, which turned out great. But getting stopped out of all those shorts (about half my overall portfolio) caused unnecessary damage. I'm down 0.37% right now, which is infuriating, because the overall market is up only .25% as of this writing.

The reason, of course, wasn't what Bernanke said; it was what people thought he might say. And that Phantom Menace cost me. Thus, my hatred of the man has deepened even more, which is saying a lot.

But public enemy #2 is his lieutenant, Janet "peach fuzz" Yellen, who did her duty last night by hinting and winking about more "stimulus" and "accomodation". These ya-ya's don't seem to recognize that there is such a thing as a business cycle and that things don't go up all the freakin' time. I've got your stimulus right here, old woman.

I need to take a breath and regroup. Death to the Fed!

I was looking yesterday for a reversal of whatever degree at my unconfirmed falling wedge upper trendline on SPX to confirm it, and we got that before it broke up. I'm expecting more upside, and will be watching the 1335 area carefully to see whether an IHS forms there. If it does then the rally will most likely be longer and go higher than I would expect otherwise: 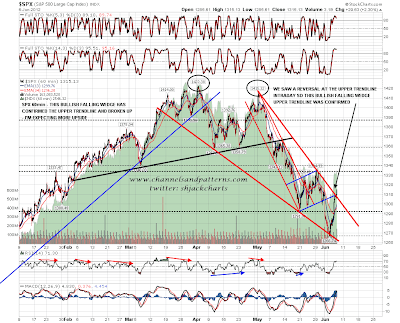