The great question revolving around Greece is now answered.  It remained unanswered when the opening segment of NFTRH192 was written.  Here is how one writer was trying to deal with these and other questions over the weekend:

Obsession With Central Bank Action is Unhealthy, But Typical

“We’re seeing some positive sentiment return on account of a few things: the prospect of coordinated intervention in the event of a sloppy Greek election, or outright victory of an anti austerity party,” such as Syriza, said Andrew Wilkinson, chief economic strategist at Miller Tabak & Co. –MarketWatch

NFTRH has been managing what I believe could be a pivot to a coming intermediate bullish phase in the broad markets. For several weeks now my response to the Ticker Sense sentiment poll has been ‘Bullish’ http://is.gd/IX10GL. This has been largely due to markets’ [previous] proximity to important support, pervasively bearish sentiment, an over bought/over owned US dollar and the ‘Sitting Democrat’ election year cycle.

END_OF_DOCUMENT_TOKEN_TO_BE_REPLACED

Well, Slopers finally pushed me over the brink to bullishness. Well, perhaps that's going too far; but I will say that the critical mass of some of the best minds here – all of whom seemed to have adorned bull horns – compelled me to step up and get long and big with FXE and IWM plus trim back liberally on shorts.

It's definitely helping. Looking at the IWM, it seems to me we're basically going to shoot for the upper bounds of our old range.

I was watching for a possible strong reversal yesterday but there was nothing to see, with the day following the standard bull format of early weakness followed by a rise for the rest of the day. On the daily chart SPX tested the 50 DMA, walking up the now rising upper bollinger band, and getting closer to the next serious resistance level above at 1357-8, with the April low at 1357.38 and the 100 DMA at 1358.72: 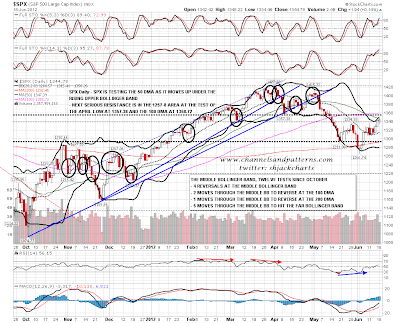