Further to my last weekly market update, here is a summary of where money flow ended for Week 1 of June 2012.

The Weekly charts below of YM, ES, NQ & TF show that they all closed higher than the prior week…the YM & NQ on slightly lower volumes, and the ES & TF on slightly higher volumes. They have reverted to last month's Volume Profile POC (yellow horizontal line), and are back inside their lower Bollinger Band. The YM & ES have closed back above trendline resistance, the NQ has remained in its uptrending channel, and the TF has closed just below price resistance. I'd like to see increasing volumes on any advance beyond their closing prices to confirm any potential sustainable rally up to, firstly, the middle Bollinger Band, and, ultimately, the upper Bollinger Band…otherwise, look for more volatile and deep intraday swings, and possibly a new low. 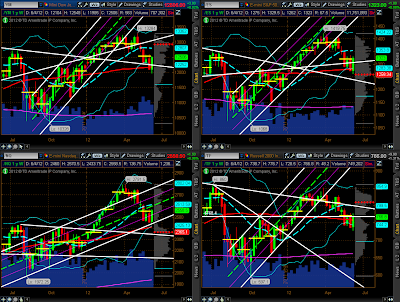 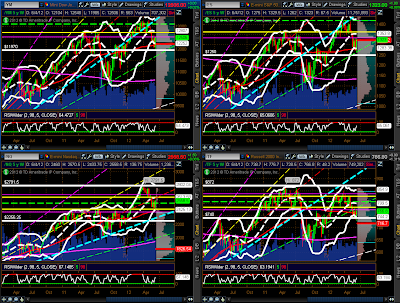 The 4-Hour charts below of YM, ES, NQ & TF show a Fibonacci retracement from this year's high to the lows that were made up until the end of May Week 4, as well as a downtrending channel. I left the Fibonacci drawing unchanged so that you could see that price ultimately closed below that low and made it to the external 127.2% Fibonacci level for the YM, while the ES, NQ & TF stopped short of that target…targets that I assigned in my last weekly market update. Price subsequently retraced upwards and is now just beneath the lower one-third level of the Fibonacci retracement (lower horizontal yellow line) and is attempting to form an inverted head & shoulders pattern, with the neckline roughly in line with this one-third level. Until price breaks and holds above this level with conviction on higher volumes, price action is subject to further volatile bearish influences…I'd continue with the SELL rating on all of these e-mini futures indices as long as price continues to trade below this level. 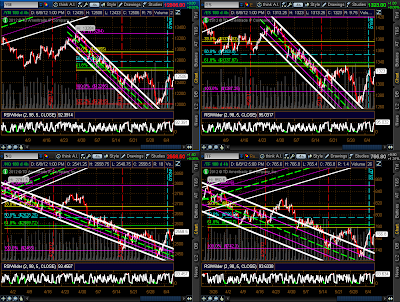 The weekly chart below of the NYSE Summation Index has given a potential BUY signal for the SPX on this timeframe, as per the Stochastics crossover. However, I'd like to see another week's bullish confirmation candle on the NYSI, since the last signal failed. This would have to be reviewed in the context of what is happening on the above charts, of course, at that time. So I am merely passing this information along as a "heads up," for now. 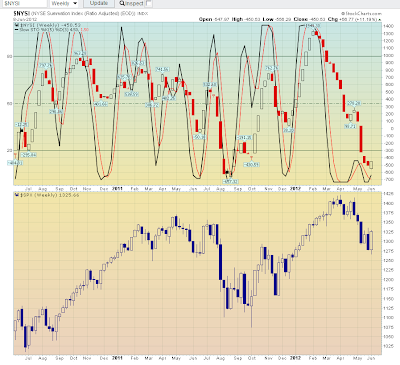 Stocks Above 20-Day Averages closed higher than the prior week at 45.70%…note that I'm going by the close as shown on the chart, and not the data above. 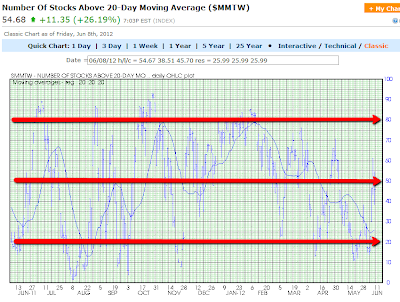 Stocks Above 50-Day Averages closed higher than the prior week at 26.96%…note that I'm going by the close as shown on the chart, and not the data above. 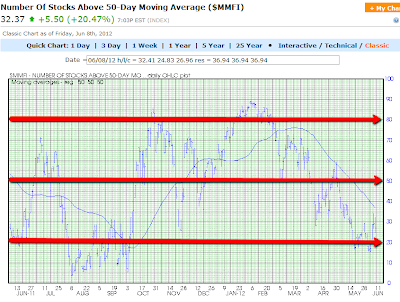 Stocks Above 200-Day Averages closed higher than the prior week at 47.58%…note that I'm going by the close as shown on the chart, and not the data above. 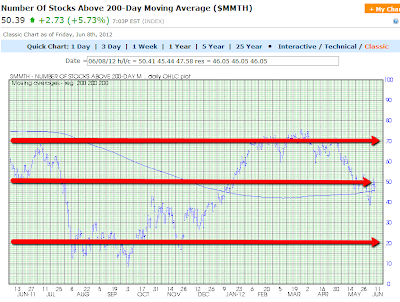 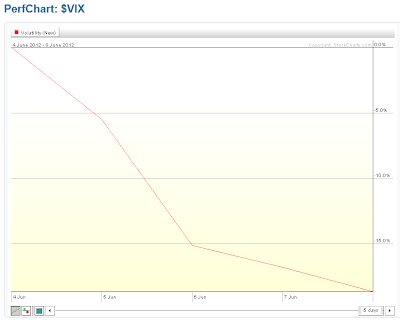 Further to the comments in my last weekly market update, the Daily ratio chart of the SPX:VIX shows that the SPX rallied and closed just below major resistance at 65.00 and the prior swing high. Near-term support is at the 200 sma at 57.75. The RSI, MACD, and Stochastics indicators have broken above their downtrend lines, and the momentum on the MACD histogram is accelerating above the zero level…all signalling potential further upside movement. 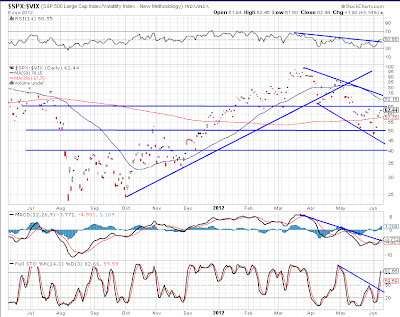 The Daily chart below of the VIX shows that price closed just above a major support level of 21.00, but below its recent uptrend line. Any reversal to the upside with conviction would need to see the VIX move and stay above 27.00. 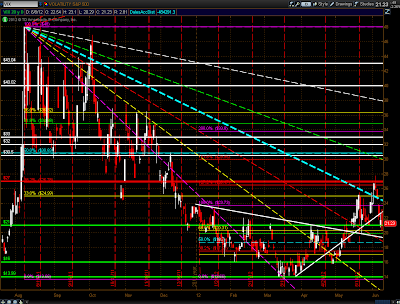 As shown on the graph below of the Industry Groups, the only group that lost on the week was Gold/Silver…a reversal of the prior week. The largest gains were in the Banks, followed by Semis, Brokers, and Internet. 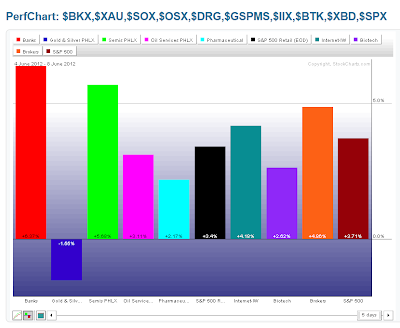 As shown on the graph below of the Major Sectors, gains were made in all of them (a reversal of the action last week), with the largest in Financials, Materials, Industrials, and Energy. The smallest gains were made in the defensive sectors, Health Care, Utilities, and Consumer Staples…the markets favoured risk, once more. 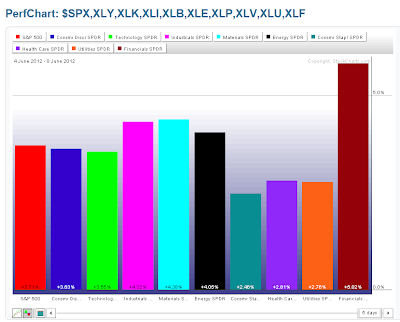 As shown on the graph below of some of the ETFs, the largest gains were in the U.S. Financials (XLF), followed by the European Financials (EUFN), Emerging Markets (EEM), Agricultural (DBA), Chinese Financials (GXC), and Commodities (DBC). 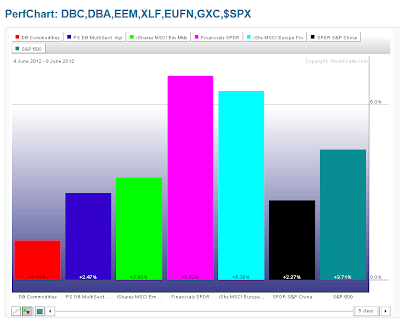 The Daily charts below of EEM and the BRIC countries show that price is attempting to stabilize…EEM and India's index have put in a higher swing high, while the Shanghai has closed below the 2300 level…please see my post of June 4th for further details on the meaning of this level. It's worth checking the price of this index Monday morning pre-market to see China's reaction to important economic data that will have been released Friday night and Saturday. 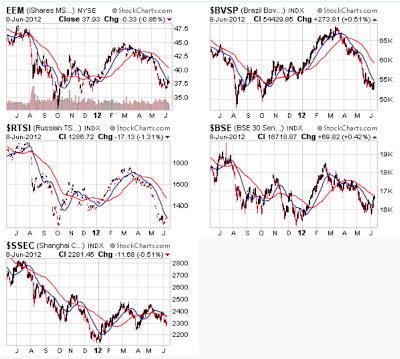 The Daily charts below provide an update on price action on DBC and AUD/USD since my last weekly market update. DBC and AUD/USD are attempting to stabilize and potentially reverse, as evidenced by upturning MACD, Stochastics, and RSI indicators. However, they're both trading under the bearish influences of a moving average "Death Cross" formation, and, as such, will likely continue to exhibit volatile (and potential choppy/whippy) price action for awhile. Ones to watch in the days/weeks ahead, as they will likely affect equity markets, as well. 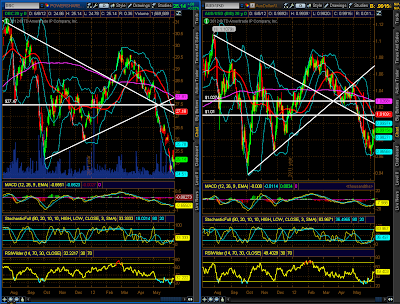 As shown on the graph below, there were losses in Gold and Copper, and gains in Silver and Oil. 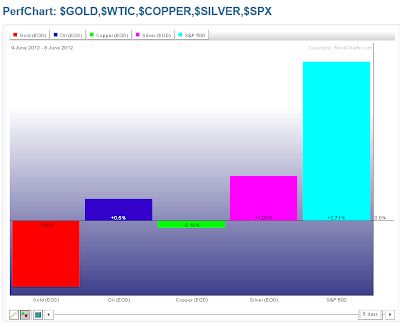 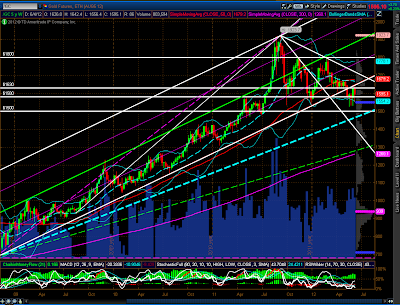 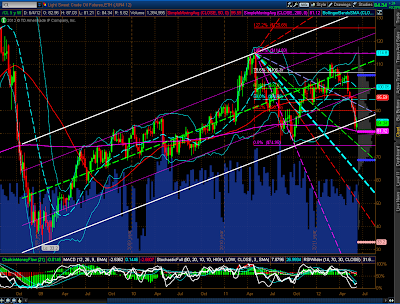 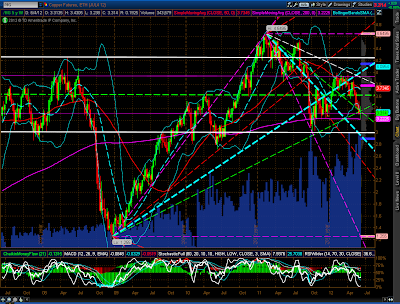 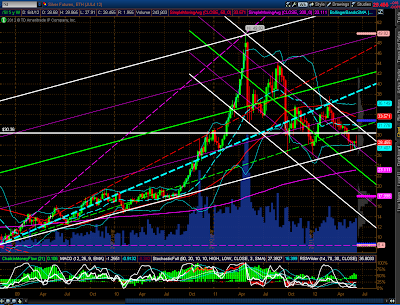 As shown on the graph below of the Major Indices, the Dow Transports gained the most, followed by the Russell 2000, the Dow 30, the S&P 500, the Nasdaq 100, and Dow Utilities. There were also gains in the High Dividend-Paying Stocks (DVY), Emerging Markets (EEM), and Corporate Bonds (JNK). 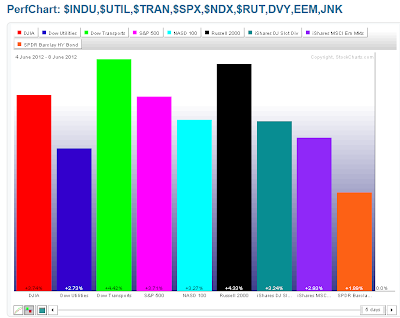 As shown on the currency graph below, money flowed out of the Japanese Yen and into the Aussie $, Canadian $, and British Pound. The Swiss Franc, Euro, and U.S. $ were basically flat. 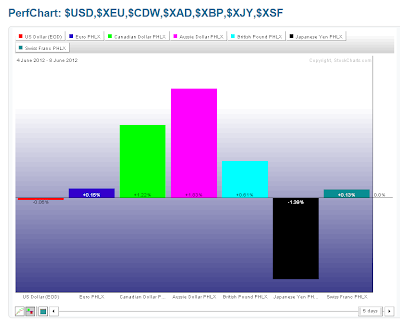 The Daily ratio chart below of the SPX:U.S.$ shows that the SPX rallied and closed just below the 200 sma of 16.32 and above major support of 15.00. The RSI, MACD, and Stochastics indicators have hooked up, and all have made a higher high than the prior swing high, but that only the Stochastics has crossed above its downtrend. This ratio pair is worth watching to see if the momentum continues to accelerate to the upside, which would indicate increased buying pressure in equities. 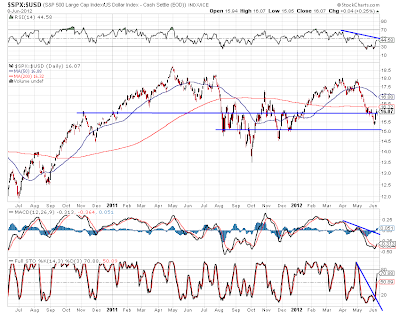 The next chart of interest is the Weekly chart below of the the 30-Year bonds (ZB). Price has retested its confluence of trendline and Fibonacci levels…one to watch to see if it now holds as support. 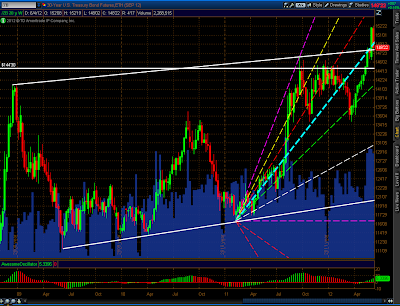 In summary, whether the markets were simply short-covering and taking profits on the week, or whether they were actively buying anew, remains to be seen. I'll be watching to see whether more volumes enter the markets next week during intraday action, and in which direction they dominate (and whether they can be sustained), in order to judge relevant moves with conviction. As well, I'll be watching for either rising or declining volatility (as depicted by the VIX), and money flow into/out of the U.S. $, Bonds, and the Financial stocks (which are attempting to stabilize, as shown on the chartgrid below). Any meaningful and sustainable stabilization of the bank stocks will require the solid backing and implementation of unified government monetary and fiscal policies, both domestically, and globally, as I discussed in my last weekly market update…otherwise, expect further choppiness and volatility in the markets (particularly the financial markets). The difference between last year and this year is that there is evidence of economic contraction in, not only the European countries, but also in China, Australia, and now the U.S. and Canada…this makes my prior statement all the more important. 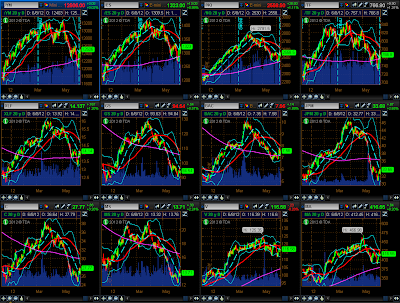