Here's a list of setups that I took from a screen of mine that is essentially looking for companies trading at half of their book value, but technically showing some strength of late. The only stock on the screen that I wasn't too sure about but included it anyway for posterity, was Korea Electric Power (KEP), and it looks like it could be ready for a bounce testing the 38.2% Fibonacci retracement level.

Other than that, pretty much all the stocks listed  have put in some nice bottoms with recent consolidation. Should this market find its footing amid recent selling, these stocks are poised to march higher. The one I like most is Tutor Perini (TPC) hat has a solid base, followed by a breakout and then a pullback/retest of that former breakout level. Ideally, I'd like to buy that between 12.25 and 12.40 with a trailing stop-loss below the 20-day moving average.

Here are 7 Stocks Flying Under The Radar.

They say that if you build a better mousetrap, the world will beat a path to your door.

I suppose that's partly true, but no one really thinks about whoever it was that was in the business of dealing with the mice beforehand. They're going to suffer, because it's their doorway that will suddenly find itself as empty as a hermit's address book.

I present to you below four long-term charts of some companies that were on the losing side of mousetrap creation. They have several things in common:

+ At one time, they had valuable, thriving common stock;
+ They were leaders in at least one technological field;
+ They allowed competitors (like, oh, say, Apple) run off with their market by creating something better;
+ Their stock has since entered a death-spiral

Some true believers of these securities might point to Apple from 1996 as the kind of turnaround they anticipate. My retort would be that there's pretty much only one Apple on the planet, and I can't really think of any other company in the tech field (except, I guess, IBM from the early 90s) that has risen from the ashes.

END_OF_DOCUMENT_TOKEN_TO_BE_REPLACED

It's been a good week for me so far. I've been much more aggressive this quarter (typically about 75% committed, almost always in shorts) versus last quarter (a more wimpy 35%, usually).

I note with some mild discomfort that IWM has closed its Eurogasm gap from a couple of Fridays ago. I've covered a handful of shorts, and have no large shorts, but all my little shorts (of which there are a breathtaking amount) would benefit from continued weakness beneath this gap. Whether we bounce or not remains to be seen.

Another big decision point is illustrated with precious metals. The chart of GLD shows that we are dancing on the razor's edge. If we crack that trendline, the next support is at 148.27. If we break that, you might be less frequent updates here on Slope, as my screen will be consistently obfuscated with splooge.

Below are four Weekly charts of Gold, Oil, Copper, and Silver.

The price action for the past few weeks on each one is presenting as a bear flag, either at, just above, or just below a major support level. Any attempts, so far, to sell off below these support levels have been met with defensive buying/short covering…ones to watch for a potential break and hold below their recent lows as a signal of more weakness in these markets, which will likely have a negative impact on the equity markets…this ties in with the theme mentioned in my last post on the Major Indices and the Major Sectors.

END_OF_DOCUMENT_TOKEN_TO_BE_REPLACED

A Striking Chart From SocialTrade

Checking Social Trade on Wednesday, I found this striking chart posted by INVESTNBEST, showing the secular bull market in 10-year Treasuries over the last three decades: (click to enlarge) 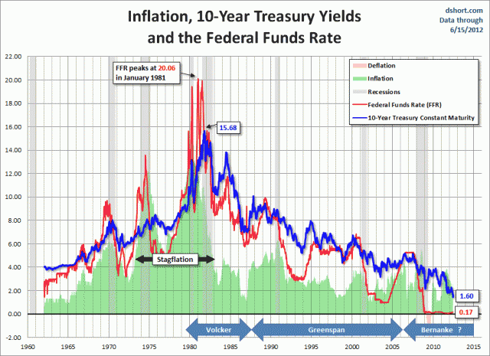