The Daily chartgrid below of the 6 Major Indices shows that, with the exception of the Dow Utilities Index, all made higher closing highs on the week.

All of them, except the Dow 30 Index and the Dow Utilities Index have now reached their measured closing targets that I mentioned in my post of August 3rd, and the Dow Transports Index has finally made a higher closing swing high. 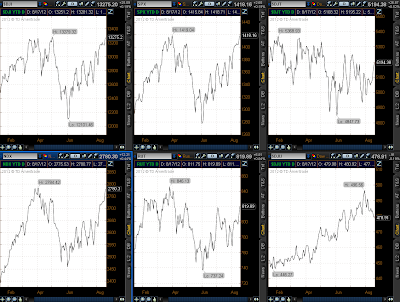 The Daily chartgrid below of the 9 Major Sectors shows that the only ones that haven't reached their measured closing targets yet are XLP, XLV and XLU (the Defensive Sectors). 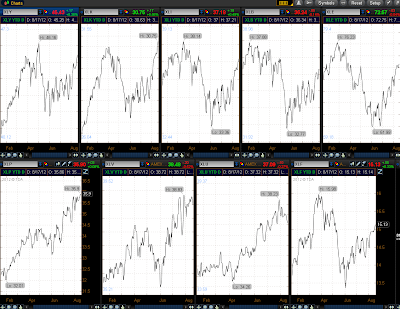 The two Daily chartgrids below depict candle action on the Major Indices and Major Sectors. You can see they are all in the vicinity of major resistance at or near their one-year highs. 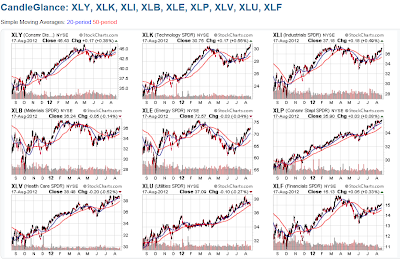 The next graph depicts percentage gained/lost for the past week for the Major Indices. As evident from the first line chart, Dow Transports gained the most, followed by the Nasdaq 100, Russell 2000, S&P 500, and the Dow 30. Further profits were taken in the Dow Utilities. 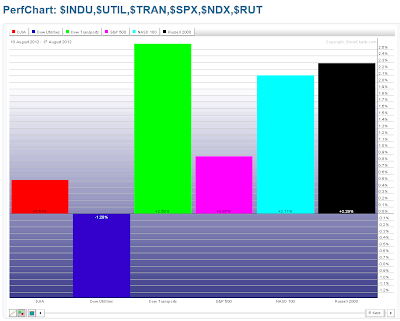 The next graph depicts percentage gained/lost for the past week for the Major Sectors. You can see the continued surge in Technology, followed by Consumer Discretionary, Industrials, Financials, Consumer Staples, Materials, and Energy. Profits were taken in Utilities and Health Care. 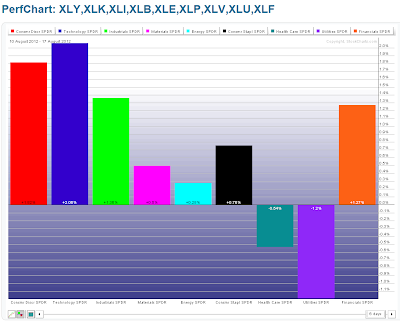 The Year-to-Date Daily chart below of the SPX:VIX ratio shows that the S&P 500 Index closed just above resistance for this time period and its channel. The Monthly chart shows an expanded view and puts major resistance up at 120…a point which happens to converge with a measured move target, as depicted by the 200% external Fibonacci retracement level on the Daily chart. When or if this target is met remains to be seen. 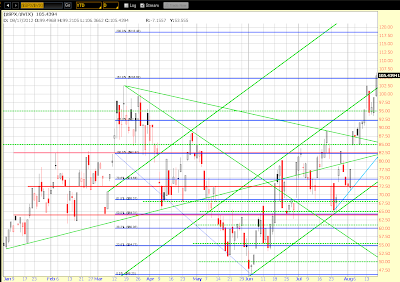 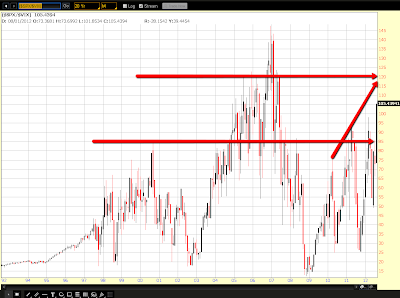 The Year-to-Date Daily chart below of the RUT:RVX ratio shows that the Russell 2000 Index closed well above resistance for this time period. The Monthly charts shows an expanded view and puts major resistance at, firstly, 46.00, then 50.00. Price closed on Friday just below the first major resistance level and just above its channel. 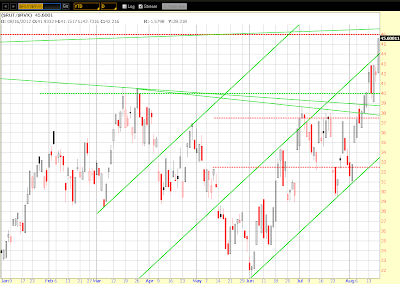 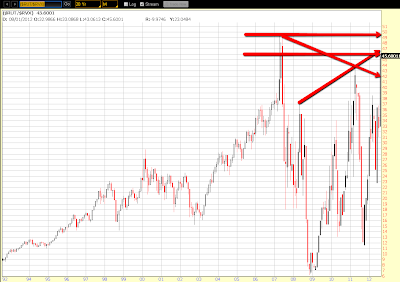 As I mentioned in my post of August 15th, these are important ones to watch over the coming days/weeks, particularly in the run-up to the Jackson Hole Symposium from August 30th to September 1st, and the FOMC Meeting results and Fed Chairman's press conference on September 13th (as well as the Eurogroup Meetings on September 15th and the European Council Finance Ministers Meeting on September 16th).
In summary regarding equities, inasmuch as the Major Indices and Major Sectors are all facing major resistance levels, I would expect that higher volumes would have to enter these markets to produce a robust rally from here that would punch these markets through to higher levels. Alternatively, we could see the market playing "Leap Frog" by pushing the "Offensive Sector" trade up one week, then the "Defensive Sector" up the next. At the moment, the markets are favouring the "Offensive Risk-On" trade. I'd watch to see if the Nasdaq and Russell Indices continue to outpace the other Major Indices, and if the "Offensive Sectors" continue to outpace the "Defensive Sectors" as a possible means to achieve this break-through scenario.
The next 1-Year Daily chartgrid features Germany and France, as well as the PIIGS countries (Portugal, Italy, Ireland, Greece, and Spain). The laggards for the year are Portugal, Italy, Greece, and Spain. 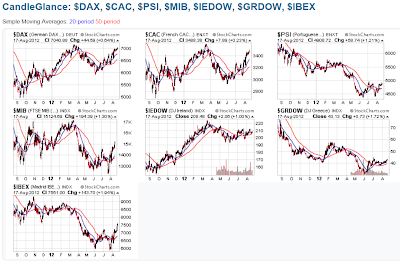 The next graph depicts percentage gained/lost for the past week for these countries. The heaviest buying occurred in the Spanish, Greek, and Italian Indices…ones to watch to see if this trend continues, and to see whether buying picks up in the Portuguese Index. The German and French Indices are near their highs for the year and are ones to watch for any signs of weakness.
In a press conference held in Canada this past week, Angela Merkel said that they are "…looking into further rights of intervention on those countries not abiding by the rules." Whether we hear any more on this remains to be seen. It's worth keeping a close eye on the laggards to see if weakness returns to those countries' indices anytime soon. 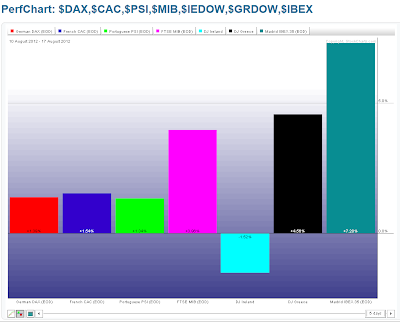 The next 1-Year Daily chartgrid features the Emerging Markets Sector (EEM), and the BRIC countries (Brazil, Russia, India, and China). They have basically been basing for the past week, with the exception of the Shanghai Index, which pulled back to its recent lows.

The next graph depicts percentage gained/lost for the past week for these countries. As you can see, the Shanghai Index lost 2.49% for the week.
My post of August 15th mentioned that if this index breaks and holds below its recent/three-year lows, that would be very bearish, which may prompt China to act with more stimulus measures…although, they may wait to see what the Fed does at its September meeting before committing any further funds. 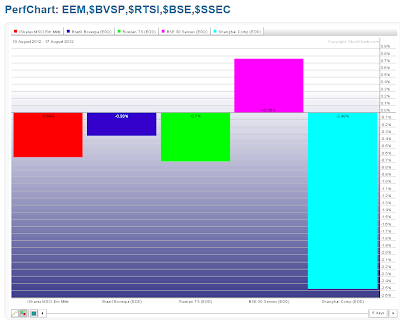 The next 1-Year Daily chartgrid features the Canadian ($TSX), Japanese ($NIKK), and World Indices. They have all advanced to close just above their major resistance levels…ones to watch to see if these hold as support levels.

The next graph depicts percentage gained/lost for the past week for these countries. The largest gains were made in the Japanese market. The next 1-Year Daily chartgrid features the Commodities ETF (DBC), Agricultural ETF (DBA), Gold, Oil, Copper, and Silver. Commodities and Oil continued to advance, while the others remained in consolidation mode.

The next graph depicts percentage gained/lost for the past week for these ETFs and Commodity Futures Indices. The one to watch is Oil, as I discussed in my post of August 15th to see if price holds above its former resistance (now support) level of 95.00. 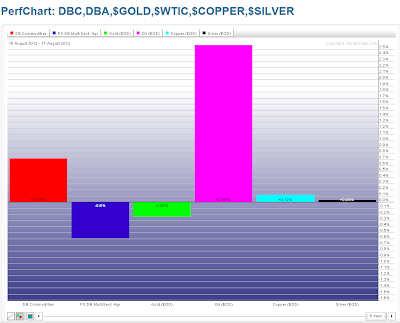 The next 1-Year Daily chartgrid features the 7 Major Currencies (U.S. $, Euro, Canadian $, Aussie $, British Pound, Japanese Yen, and Swiss Franc). The U.S. $ is, effectively, high-basing near its 1-Year highs, while the Euro and Swiss Franc are low-basing. Should the Euro break and hold below this year's low, it could drag the European Indices down, as well. 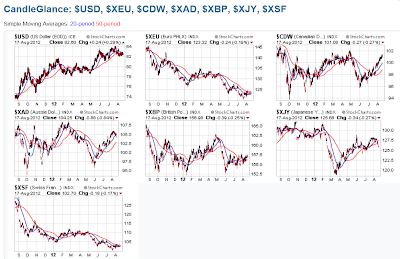 The next graph depicts percentage gained/lost for the past week for these currencies. Profits were taken in the Japanese Yen and Aussie Dollar. 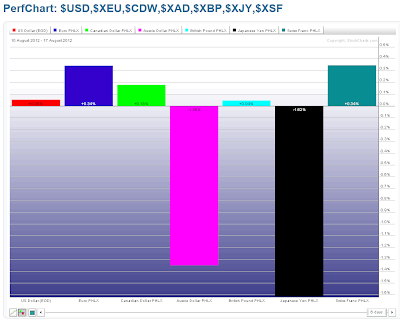 The next Weekly chartgrid shows the Commodities ETF (DBC) and the AUD/USD forex pair. It will be interesting to see if Commodities continue to advance into overhead price and trendline resistance, particularly if AUD/USD continues to drop…ones to watch, along with China's Shanghai Index. 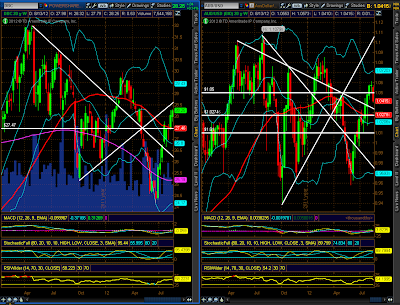 The next Weekly chart of the 30-Year Bonds shows that profits have been taken recently. Price is sitting just above a confluence of major support at 144'30. A break and hold below this level would likely see the equities markets advance further. Inasmuch as Friday's data indicated that consumers are expecting higher inflation of 3.6% over the next year, no doubt the markets (and any further QE measures by the Fed) will deliver that result at some point…possibly sooner rather than later. 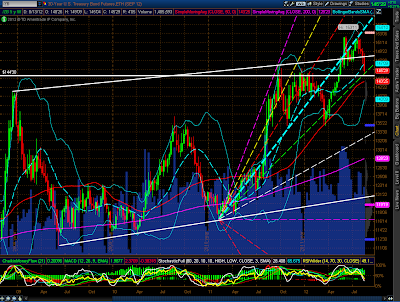 The next Weekly chart of the Homebuilders ETF (XHB) shows that price closed on Friday at major resistance after breaking above the apex of a small "diamond" pattern. A break and hold above this level may indicate that the markets are expecting some kind of assistance with respect to the housing/mortgage/foreclosure problems from the Fed at their September meeting. Existing Home Sales and New Home Sales data being released next Wednesday and Thursday, respectively, should provide further clues as to the health of this sector. Both saw drops in sales last month, as shown on the 2 graphs below. Existing Home Sales have been, basically, declining since they peaked in December of 2009, and New Home Sales have stabilized just above their 2009 lows. 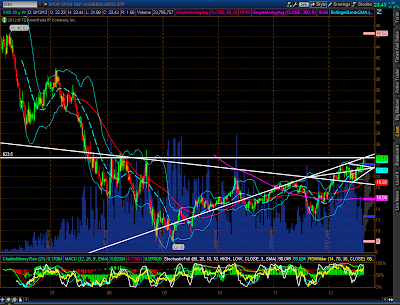 The next Weekly chart of the Lumber Futures Index shows that price pulled back on exceptionally high volumes by Friday, after reaching major price and channel resistance. It's worth watching XHB to see if it breaks and holds above its major resistance level, since Lumber may follow. Otherwise, I'd look for profit-taking to begin in both of these. 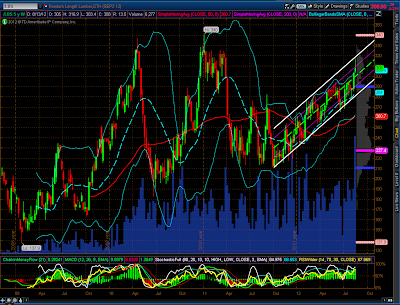 Enjoy your weekend and best of luck next week!
https://slopeofhope.com/2012/08/money-flow-for-august-week-three-draft.html
Money Flow for August Week Three