WASHINGTON (MarketWatch) — The following is the text of Federal Reserve Chairman Ben Bernanke’s speech at Jackson Hole, as prepared for delivery:

“When we convened in Jackson Hole in August 2007, the Federal Open Market Committee’s (FOMC) target for the federal funds rate was 5-1/4 percent. Sixteen months later, with the financial crisis in full swing, the FOMC had lowered the target for the federal funds rate to nearly zero, thereby entering the unfamiliar territory of having to conduct monetary policy with the policy interest rate at its effective lower bound. The unusual severity of the recession and ongoing strains in financial markets made the challenges facing monetary policymakers all the greater.

END_OF_DOCUMENT_TOKEN_TO_BE_REPLACED 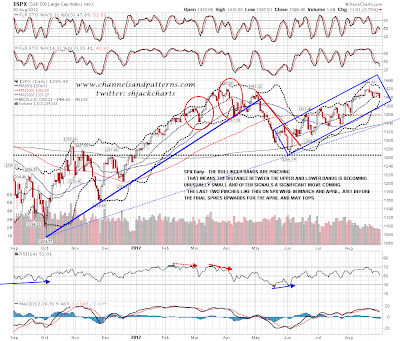 END_OF_DOCUMENT_TOKEN_TO_BE_REPLACED

The general Small Cap and the Semiconductor sectors are considered
speculative leaders to the broad US stock market.  In painting bullish
chart potentials, what do they think they see?

We observed a bearish pattern on the Small Caps and a bullish one on the inverse fund TWM in mid-May, noted the "kiss goodbye" to the topping pattern at the end of May, noted a precarious situation for bears in mid-July, a Bull Flag channel in early August and then the competing bullish patterns a week ago.