It was a” hurry up and go nowhere” kind of a day. In the
morning, around 8.30 AM eastern I sent out this tweet: “GMA. Going to be like yesterday. Risk rally on old stories and fade
during the day. it has to break either way. Tiring” . Around 9.40 AM
eastern this tweet;” Cash SPX opened with
the same range of yesterday. Oil is selling off. PM sector is weak. We may get
some selling later”.  Then we had our
little sell off and at around 12 noon eastern this one: “Well, we have the sell off and I think we are done for the day.rest of
the day will be Chop Zone.”

There were lots of other tweets but basically those three
sum up the day. More the reason you should join me in Twitter (@BBFinanceblog)
so that we can communicate real time market action.

Coming back to the market, 1st let’s take a look
at the daily chart of Euro:

END_OF_DOCUMENT_TOKEN_TO_BE_REPLACED

The interesting aspect to today's action is that the USD has weakened noticeably as the EUR/USD has broken out to the upside from its more than 2-week correction.  Thus far, neither spot gold and the SPDR Gold Shares (GLD) nor the S&P 500 is following the Greenback's lead. At least not yet.

The market is whipping all over the place today, with no obvious direction. My shorts have been doing pretty well – – as of this writing, I'm up 0.2% versus the market being down 0.13%, and I've got half my portfolio in cash. One of my shorts is Starbucks, which had a break of a long-standing trendline in June and looks like it could be heading to about $40 or a little below.

Excerpted from the September 30 edition of Notes From the Rabbit Hole:

I often refer back to my first publicly written article
(FrankenMarket Lives, 2004) because it simply stated the terms by which
the stock market lives here in the age of Inflation onDemand,
which was kicked off by Alan Greenspan in 2001 and is ever more
aggressively managed to this day by his successor, Ben Bernanke.

From the article’s opening segment:  “As we enter the summer of 2004 [fall of 2012],
our markets appear to be moving with all the grace of Dr.
Frankenstein’s creation, staggering forward, arms outstretched and
seeking sanctuary [i.e. inflation].”

From the ending segment:  “This market was stitched together with debt, and it will require more of the same to keep it going.”

This is why risk is so high for bears, as it is for bulls.  The stock
market is running on lust for easy monetary policy, which these days
does not simply mean that authorities seek to maintain accommodative
interest rates but rather, that they seek to destroy prudent savers and
risk managers, forcing everyone into the pool – a cesspool of putrid,
rotting things that died on the vine long ago – of speculation.  The
nation’s seed corn is in that sewage as well.  It is ‘all or nothing’
and there is ample risk to go around for everybody.

FrankenMarket was fed a heaping helping of unsound and inflationary monetary policy at the last FOMC meeting.

Buying un-payable legacy debt with newly printed money is nothing if
not intensely inflationary.  Here I will ask that readers not
automatically think ‘inflation=rising asset prices’, because inflation
also equals moral hazard, booms and busts, economic burdens and
diminishing returns.  In other words, deflationary liquidations become
part of an inflationary regime.  There is nothing smooth and sustainable
about a seemingly bullish environment brought about by money printing.

Here we have FrankenMarket – now eight years on – still being
stitched together with ever more exponential layers of debt seeking more
of what has held it together post-2008.  When the original article was
written in 2004, I never imagined the inflationary situation could take
this long to resolve and indeed it did not; phase 1 of FrankenMarket –
Alan Greenspan’s phase – was resolved but good in 2008.

Phase 2 has simply amplified the hazards and exponentially increased
the risks; not of a bear market or even a temporary liquidation like
2008.  Phase 2 – being ‘all or nothing’ – has increased the risk of the
end of the system.  This is the only reason I can think of that policy
makers have gone all in, despite a stock market near post-2008 highs and
a ‘jobs’ picture that while still depressed, has basically stopped
degrading.

We can drop any pretense that our economy is about anything other
than the ability of policy makers to leverage the world’s reserve paper
currency toward asset propping ends.  The investor class is favored and
the working and lower middle classes – along with Granny and her
Treasury bond income – are collateral damage.  In fact Granny may be in
junk bonds by now at the advice of her smart, young financial adviser
who found her some really nice return.

We are all speculators now.  Get used to it.  We were once a nation
of workers, savers and builders.  We should not blame policy makers for
this because they are just the dim-bulb extension of our own fading
inner light.

I often used the word “hubris” in early writing because the main
threat was not the evil Greenspan or the dangerous Bernanke (he of the
famous 2002 speech “Why It
Will Not Happen Here”), but rather our own apathy as a people (and
Europe, here we include you as well along with most of the developed and
modern world).  But in America especially, a sense of entitlement that
accompanied the 60” Flat Panels and 4,000 s.f. McMansions bought on
credit showed a society that had forgotten the faces of its hard working
fathers and mothers.

We have gotten the financial system we deserved and we have gotten
the government we deserved.  Not enough of us used critical thinking to
speak out against the trends that have been in place since Greenspan
engaged the age of Inflation onDemand.  What we did was sit
back, make ‘coin’ off of the bastardization of the currency and lever
up.  All the while the mainstream financial media and financial services
industry drone on about earnings, valuations and other conventional
stuff.

The monster popped its stitches in 2008 and the Fed has sewn the
thing back up again.  If they vacuum up enough sludge and pump enough
money we may see the final destruction of the bears as the prices of
things gain traction.  But with the risk of inflation-fueled price
increases comes the increased risk that all of this leverage will fail
into liquidation.

That’s our market, and eight years on it still lives.  Risk
management is our number one job, not gold stock investing, regular
stock trading or conventional thinking.  Risk management against all
possibilities.  Now, post-FOMC QE panic, NFTRH tightens up the focus
because we stand to make some serious gains and lose some serious
capital perhaps all within shorter time cycles than ever before because
leverage has gone exponential in the interest of keeping FrankenMarket’s
stitching from coming unwound again.

I'm doing an all equities and bonds edition today as there are some interesting things I'd like to look at. I'll start with the standard charts so on the SPX daily chart. SPX tried to break up from the middle bollinger band yesterday but returned to close there again. Of the three instances in the last year where SPX broke below the middle bollinger band and then recovered over it, the last setup that looks a lot like this was in June, and that resolved upwards. A small sample though: 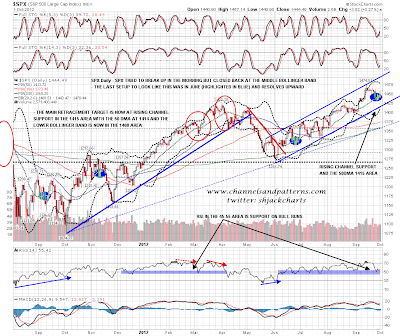