On the SPX daily chart yesterday we saw a clear break up from the middle bollinger band and the minimum target for that break is the upper bollinger band, which was at 1472 at the close yesterday. I'm expecting a retest of the highs and most likely another smaller retracement from there to test (and possibly break) SPX rising channel support, which was not hit on this retracement and is unfinished business below. That said the daily bollinger bands have pinched in, and historically that has generally led to a strong trending move that pushes the upper bollinger band up considerably. If we don't see a reversal in the 1470-80 SPX area, the upside target would therefore be at rising channel resistance in the 1500-20 area, which also has some longer term resistance that I will be talking about in detail if we see no reversal near the current 2012 high: 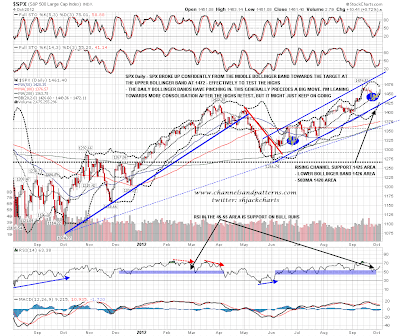 On the SPX 60min there is no current sign of a short term high and I'm expecting more upside: 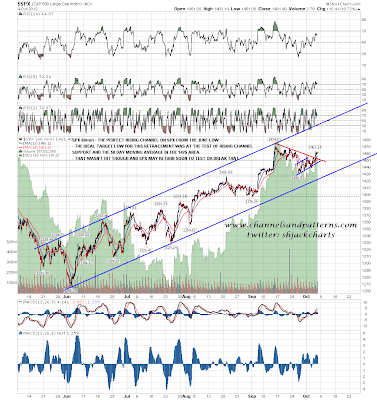 TRAN is still in a possible reversal area around 5003 resistance. On a break above with any confidence the upside target is 5130 area resistance but until then we could see a significant reversal here: 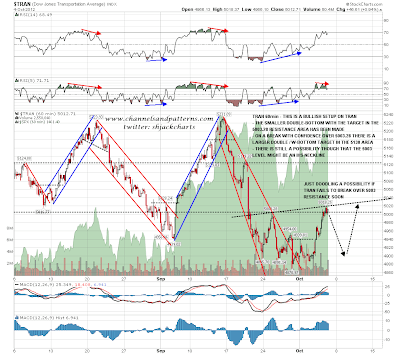 TLT has broken the small double-top trigger level with a target at 122. Falling wedge support is in the 116 area but the wedge has three touches each side now and that support may not be reached before the wedge (69% bullish) breaks up. This is another reason why I think we may see more retracement from the 1470-80 SPX area: 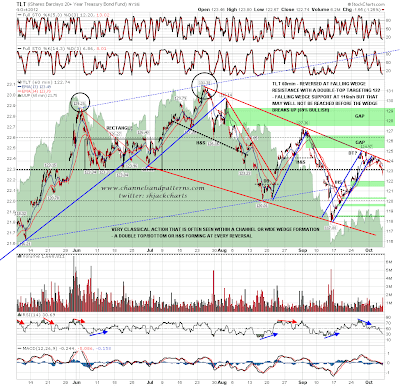 I was talking about the bull case on CL yesterday and there was a very nice bounce there. I have a likely target for this move in the 93.3 – 93.7 area but short term CL will need to break up from the possible declining channel on the chart below. I'm expecting that to break but I'll be happier about more upside on CL once we see an hourly close over it:

In fundamental terms EURUSD looks very unattractive, but short term that doesn't mean a lot. In technical terms there is a very nice bull setup here with the IHS targeting the 1.313 area and a probable retest of the highs around 1.317. There is also now a strong support trendline in the 1.288 area and the bear case on EURUSD would only start to look slightly interesting on a break below that. Rising support from the low is now at 1.2725 and if that breaks then EURUSD would most likely retest the lows. Until then though, the highest probability path on EURUSD here is currently upwards:

I haven't time to post a gold chart today but I've mentioned regularly that the 1800 resistance level is a likely area to see a strong retracement. That is still my view and historically gold tends to decline in October. The chances are that will happen this year too. That is another reason to think that SPX may have more consolidation ahead as gold and equities are strongly correlated at the moment. We'll see how that goes.

For today I have a strong resistance level on ES at 1462, and an hourly close above should clear the path for a SPX to reach the upper bollinger band and retest the current highs. ES is testing that level now and if we see some early weakness today, it would most likely be from there.

I'm taking a long weekend to see some old friends and won't be around much today.