Each candle on the charts below represents a period of three
days. The current candle closed today (Wednesday). I wanted to look at
this timeframe on the assumption that the two-day rally (which began on Monday
this week) was simply a pre-election dead-cat bounce, and to see how much lower
today's close was compared to Friday's close. Here are the figures for each of
the Major Indices.

END_OF_DOCUMENT_TOKEN_TO_BE_REPLACED 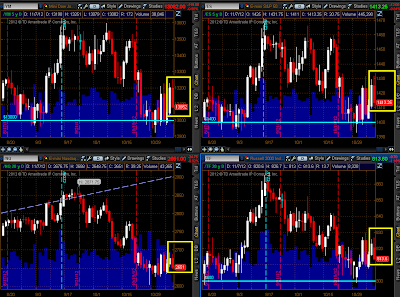 Well, as much as I absolutely relish days like these, buying does occur at some point, and I'm holding off on my fresh slug of shorts for the moment. But just for the moment.

The election is over and Barack Obama has been re-elected for another four years. In market terms this means continuity and we will find out where current policies, still directed by the mad munchkin at the Fed, will eventually take us.

Short term the chart I capped two hours ago on ES a couple of hours ago, and annotated predicting retracement from the 1432 retracement level that I was talking about yesterday morning, is already very out of date, as that retracement is now well in progress. I don’t have time to redo it so here it is. There is decent support at 1410, and the last two lows are at 1411 (overnight) and 1402.5. A break below 1402.5 would open up a test of the 1393 low that might go as low as 1388, which I’d expect to hold: 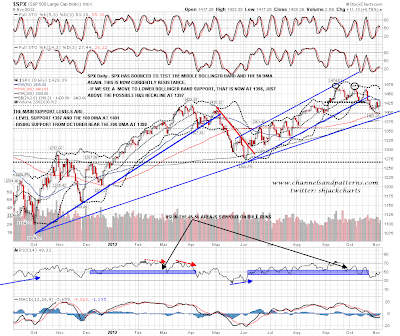 I posted the NDX 60min chart on twitter yesterday afternoon showing the test of declining channel support there yesterday. That was the obvious reversal level and it’s possible we could now see NDX make convincing new lows as channel support is slightly under 2600. For the moment though I’m assuming that the current lows around 2636 will most likely hold as a reversal W bottom continues to form: 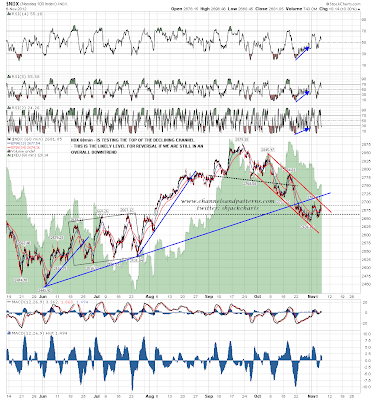 The Dow is worth a look this morning as a very nice rectangle bottom has been forming there. Despite the name this is actually a 55% bearish pattern, but the pattern performs best on upward breakouts. Rectangle support is in the 13040 area and rectangle resistance is in the 13300 area. I’m leaning bullish on this pattern unless we see a clear break below it: 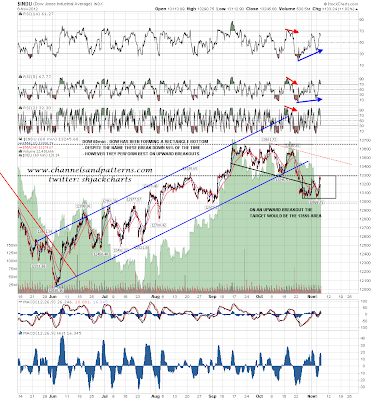 My EURUSD chart this morning is also now out of date, as the possible flag channel I had identified has now broken downwards. As I mentioned on the chart, this means that the target I gave earlier in the week in the strong support area around 1.244 is still the main downside target:

My CL chart is not out of date yet. There has been a retracement overnight from the high yesterday and I’m still leaning bullish as long as the 87.5 resistance turned support area holds, which it is still doing. Upside targets are declining resistance in the 89.5 area and, on a break over that declining resistance, the W bottom target in the 90.4 area:

Gold had a strong move up overnight on Bernanke’s sort of re-election, and I think there’s a good chance we have now seen the retracement low there. If the current short term high holds we may well see a reversal IHS form and the ideal right shoulder low would be in the 1700 area. I have sketched an idealized version of how this would look on the chart. On the bigger picture gold is 10% above major support, my ideal eventual targets for the bull market on gold are somewhere between 100% and 300% away, and there is a strong bull pattern that has broke up in August with a target in the 2050 area. I like gold a lot here:

I don’t have a clear downside target today, but SPX has been holding above the key support levels so unless that changes I’m thinking that we have made or are very close to making the two month retracement low. Fiscal cliff permitting, this is the obvious place to start the rally into Xmas that would normally start here in an election year. I’m a bit doubtful about a long term cross-party budget deficit agreement being agreed next year, but I’m expecting the parties to at least agree on a significant delay into 2013 to allow time for such an agreement to be attempted.

Perhaps you thought your favorite blogger was sleeping peacefully on the west coast. Not so, my friends, not so.

It was an exciting evening, to be sure. Obama won – – and in precisely, exactly the way I said he would (repeatedly) – – and, in spite of a very strong Euro, ES and NQ did a swan-dive. I was looking forward to a very cool trading day on Wednesday.

And then, soon before I went to bed, the ES was down a mere 1 point. WTF?!?!? And then, right before hitting the light, the ES was up 4 points. Double WTF! I saw that, once again, the bears were getting ripped-off.

After a very restless few hours, I flicked on the iPad once more, this time around 4 in the morning, bracing my stomach for the worsening news. What would the ES be up now? Ten points? Twenty? More?

Errrr, nope. And we can all thank our dear, now-very-relevant friend, the Euro:

See that red circle and the trendline? I drew those last night, around the time the polls were closing. A beautiful new pattern became clear to me. However – and this is a big however – – when I saw the ES surging last night, I figured the pattern was kaput; I didn't even bother looking. But, au contraire, the pattern not only was intact, but it was unfolding magnificently. Evidently the whole of Europe declared – – and did so VERY suspiciously just after Obama had won his second term – – that their economies were sucking out loud, and would continue to do so. Hence, the EUR/USD swan-dive.

Need you ask how this aided the rise of the ES?

Simply stated, the Obama administration, along with all of its departments, now have lost the reason to lie. The numbers can be truthful, because the next four years are secure.

And, oh, won't it be an inconvenient truth. It's a good thing that marijuana is legalized in several states now. What our leaders desperately need is for our idiotic citizenry to be toking up, stumbling around, blissfully aware of what is going on all around them.