Even I have my limit as to how many charts I want to look at in a given day, and that limit has been reached. So, instead of yacking about bar graphs, I'll just get some pet peeves off my chest. Now is as good a time as any, and it'll be a nice way to wrap up my blogging day.

Entering Key Codes Twice -  perhaps this is peculiar to the Macintosh, but when logging in to a new WiFi hotspot with password protection, you have to enter the password twice. There is absolutely no logic in this! If you were setting up a network, yes, I can totally see the need to enter the keycode twice, because you want to make sure you've got it right. But – – when joining a network – – it's hard enough to get all the characters (uppercase, lowercase, special characters) correct in the first place. Where is the value in entering a password two times in a row? You don't know, do you? The reason is simple: there IS no value.

Musicians as "Artists" -  You hear this all the time, including when folks are commenting about those cranking out rap music and other such crap; these individuals are referred to as "artists", in the same way a Monet or Van Gogh would be. Look, the fact that these guys have made millions upon millions with their own form of creative expression is just fine and dandy, but these are no more an "artist" than I am. (This includes The Arist Formerly Known As Prince).

United Healthcare Advertisements -  There is no company I detest more than United Healthcare. I could do a whole series of posts as to why, but suffice it to say I've never dealt with any

organization more horrible. Just to add salt to the wound, the good folks at UNH have decided to advertise on the radio, on buses, and on the trains around here, and the most egregious of these ads appears on NPR. If you listen to NPR, you've probably heard it.

It features a woman with a slight but clearly present Hispanic accent; she speaks of her accident, and a chorus of what sounds like a mariachi band starts playing louder and louder in the background. She speaks fondly as to how United Healthcare "spoke her language" and helped her with the aftermath of the accident ("They even helped me calculate what it would cost!" – – as if that's some kind of favor; notice she didn't mention them helping her pay for the damned thing). Bring me the head of the SVP of Marketing from UNH on a platter!

Tellme's Popcorn Sound –  When you call a computerized phone-tree system these days, you will likely be dealing with TellMe technology. The computer will ask you questions in a very friendly feminine voice, and you will need to respond (I offer my responses with clever obscene phrases at the end, since it doesn't seem to affect the outcome of my vocalized input).

Anyway, as the computer is "thinking" about things, between each question, it creates sort of a popcorn-popping sound. Perhaps in this world of six billion humans, there is someone who finds this sound to be jaunty, clever, or even amusing. I do not. Which is why I'd like to point out that there is still room on the aforementioned platter for the head of whoever came up with this idea. Because I don't need a cute little popcorn sound to let me know that a computer is processing my request. Just get me a freakin' human with whom I can speak.

SC Johnson – I have nothing against the company or its products per se. What grinds me is how, whenever they mention their name either in print or in a television ad, they have to tack on: "A family company." Is this supposed to be sweet or sentimental?

Am I expected to come all over myself because a real, live human family – – perhaps a pipe-smoking dad with a child on each knee, and a mom in an apron in the background pulling out a freshly-baked pie from her oven – – is behind this multinational organization? Folks, this is a 12,000 person company with $9 billion in annual revenue. I think they can just drop the feel-good suffix. Jesus.

Gardens, the Chili's, the TGI Fridays, and all the other casual dining establishments out there. I can eat much better food, at much better prices, at my local, well-known venues (most of which are "family companies" in the real sense).

I read recently that most of these places don't even conjure up their dishes out of cans; instead, a corporate distribution network ships them all what are essentially frozen dinners that they microwave when a customer orders them.

Since I don't eat there, I don't really care, but what does sort of gall me, because I have a deep loathing of fakery and phoniness, are the commercials that come on showing the chef (or an entire crew of chefs, plural) scampering around the kitchen, expertly carving up choice cuts of meat, fresh vegetables just picked from the garden outside, and spices they carefully ground in a nearby mortar and pestle. Tall white chef hats are required, of course.

A recent Taco Bell ad I saw showed a woman (who was presented as the Head Chef of the entire operation) excitedly talking about her "latest creation". You know as well as I do that every single dish at Taco Bell is simply: (a) ground beef; (b) cheap spices; (c) masa flour, offered up in some form of hard or soft shell; (d) diced tomatoes; (e) cheddar cheese; (f) refried beans; (g) sour cream, all of which are assembled in some certain fashion. There is no chef, and there are no latest creations.

Wearing a Wristwatch Backwards – Please tell me you don't do this. By "this", I am speaking of the habit of wearing a wristwatch so that you have to flip your hand upside down to read the time. (That is, the face of the watch is the same direction as the face of your palm). Why do people do this? Just to be different? Surely it's not for ergonocmics, because it seems an awkward prostration to go through. Just wear your wristwatch like everyone else. We'll still respect you.

Today's Lazy Trades come at a cross roads for the stock market. Either we bust through this strong level of resistance on the S&P OR we go straight back down from where we came from.

Either way, it will require traders to be nimble and not get ahead of the market until the market makes its intentions known.

The Long setup in Air Lease (AL) has a long-term cup and handle pattern at work. If this stock works out and the market moves higher from here, I could see where this stock could become a position worth holding in excess of a month, but in order to do so, the market would need to get fairly bullish, very soon.

Depending on how we close, if we can't put together any substanal gains into the close, and instead pullback from where we currently are, than I may add some TIF to the portfolio as it is right up against short-term resistance after formerly confirming a double top pattern.

Be sure to check out more of Ryan's Swing Trading Strategies at SharePlanner.com

Earlier today, I was monkeying around with the chart of the Russell 2000 ETF (symbol IWM), and just for the hell of it (which is the thoughtful basis of many of my mark-ups), I placed a Fibonacci Retracement study from 10/4/2011 to 9/14/2012. I was stunned at the result.

It's evident that this retracement has meaning for this symbol; it's interesting to me that, in the span of merely six days, we have traversed an entire range from one level to another.

Well, I'm pretty busy catching up after the quiet holiday week, so this is going to be my laziest post ever. Below are the symbols on which I'm entering new shorts today. I realize the notion of shorting at these levels flies in the face of what seems to be a near-universal consensus that we're going to keep going higher until May 2013, but I offer them here nonetheless:

I don't trade Facebook, but I do like to check the social networking stocks periodically. FB has soared about 40% in just the past couple of weeks, but I think caution is warranted as it approaches a major gap, highlighted with the horizontal line below.

We saw a very strong day for equities on Friday and, despite the short session and holiday volume, SPX broke a number of key technical resistance levels that I'm inclined to take seriously. It wasn't a proper trading day on SPX, but I haven't noticed that making a lot of difference in the past when key levels have broken, and the benefit of the doubt is now back with the bulls.

On the SPX weekly chart the middle bollinger band (BB) target was in the 1412 area. SPX closed at 1409 which counts as a hit, so that is no longer a target. There have been fourteen hits of the weekly middle BB on a move from the weekly lower BB in the last fourteen years and eleven of those broke back above it. Of those eleven nine went on to hit the weekly upper BB, now in the 1475 area. Of the three hits that reversed at the weekly middle BB back down to the weekly lower BB, two went one to make the major lows in 2009 and 2010, and the third made the right shoulder on the 2010 IHS: 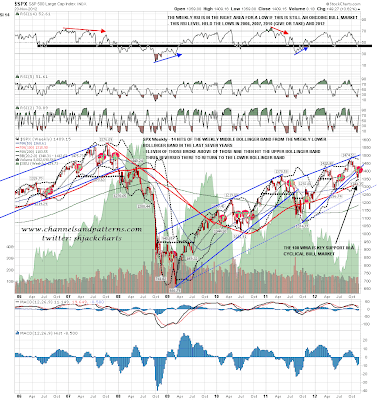