I was saying in my weekend post at Marketshadows yesterday that if we are going to see the bullish scenario into 2013 fail, then the most likely place to see that failure is near the highs last week, as SPX tries to break over the weekly middle bollinger band. You can see that post here. Historically the odds for a break above are good, with fourteen moves to test the weekly middle BB from the lower BB in the last seven years, of which eleven broke back above, and of those nine then reached the weekly upper BB, now in the 1455 SPX area. However three of those did reverse at the middle bollinger band: 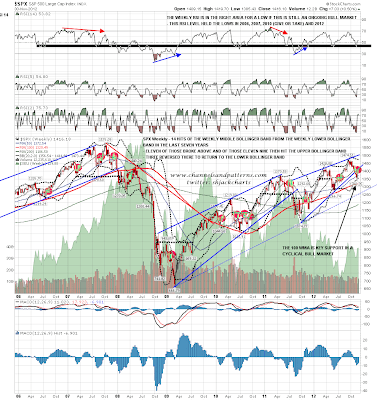