I recently went back and forth with a gentleman who claimed that there are no statistical advantages in investing.

No, he just wanted me to read a chapter from a book. As if in that one chapter, the author was able to defy mathematical science, more specifically probabilities.

END_OF_DOCUMENT_TOKEN_TO_BE_REPLACED

It may seem odd to feature some videos about a deceased comedian, but I'm doing so for three reasons:

(a) I have long thought Greg Giraldo was brilliant, and his work merits sharing;

(b) The market is so boring these days that my feet are falling asleep;

(c) It's a very well-done tribute

So I offer you this entertainment honoring a man who died far too young:

The long-term T bond could be a great short even if it remains within
its secular uptrend (interest rates in a secular downtrend) because as
the big picture monthly chart of the ‘Continuum’ shows, there is a long
way up to the 100 month EMA where another theoretical red arrow would be
painted on long-term interest rates.

Dialing in to a weekly view of the iShares long-term T bond ETF, MACD
and RSI have been sporting ongoing negative divergence for a year now.

TLT is in a weekly downtrend by AROON, but it is in a daily uptrend.
We have have a projected 2012 target of just above 130 based on a
pattern we have been following by daily charts.

Depending on next week’s FOMC and the likelihood that the
manipulators of the macro economic environment will choose ‘inflation’
as the easy fix to unfixable structural problems, the bond could get its
final bump up to target.

By stating they will outright buy a hopelessly indebted nation’s debt
obligations, without the sanitizing effects of Operation Twist, the
herd could knee jerk into the bond amid the Fiscal Cliff uproar, get
nice and comfy and then wait to be sheared as the inflationary effects
(which would erode any perceived ‘value’ of these bonds) of such actions
become apparent in 2013.

This is a valid setup that would go against many people’s
expectations.  After all, gold is forecasting no inflation, right?  Yeh,
right.  The other side of this trade is that where ever gold bottoms, a
chance to acquire monetary insurance would once again be at hand for
people who need such insurance.  Want to bet the herd will once again
choose not to own this insurance if gold visits 1625 again?

That is a level that has been on radar all along.  Here, let’s update the weekly charts.

Gold is clinging to the critical 1690 parameter.  If it should lose
this level and get the majority of technicians wrangling even more
obsessively, it is going to the green shaded support zone.  It’s only 70
bucks lower after all.  Gold could do that with one hand tied behind
its back.

Meanwhile, gold is at the lower limit of the Ascending Triangle in
Euros.  The Euro is getting over bought by a global herd that, if it
could just step outside of itself and observe itself objectively, would
appear quite absurd.  Wasn’t it just last summer that Europe was
ending?  You see the hilarity of course.

But technicals are technicals and gold would preferably stabilize in
Euros now at the lower triangle limit.  Of even more importance is the
purple weekly EMA 60, which has supported Au-Euro on previous breakdowns
below the EMA 40.

This was going to be a quick post on the long bond and inflation.
Then it expanded, I guess because I find it really interesting to see
the role gold is playing in the run up to FOMC; the same FOMC that has
stated that Op/Twist is ending this month, which would leave any future
inflationary operations unsanitized.  You see? http://www.biiwii.com

I last wrote about AAPL here and here. I'll provide an update on where AAPL is relative to
price and relative to the NDX.

The updated 5-Year
Weekly chart below of AAPL shows that a Head & Shoulders
pattern may be forming, with declining right shoulder and neckline within its
rising 4-year channel. 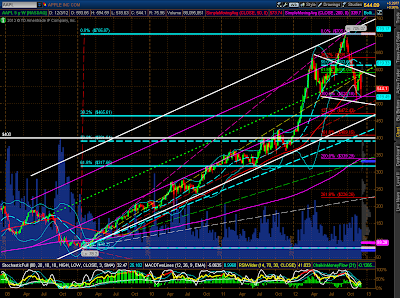