Data released today (Tuesday) shows that Canada's
Trade Balance deficit shrank, while it increased for the U.S.,
as shown on the graphs below. 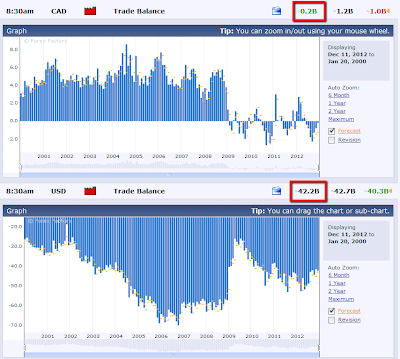 END_OF_DOCUMENT_TOKEN_TO_BE_REPLACED

Before I get to the nitty-gritty I want to discuss a few random thoughts.

It’s been twelve days of range-bound trading for the S&P 500 (SPY). The benchmark ETF has been stuck between $140 and $142.50, but the journey through limbo land could be over soon enough.

The march into a short-term overbought today could be the last gasp for the bulls. The bears have been salivating waiting for the opportunity to push this market and the pot odds say its a go. The move since November 16th has finally extended itself so the odds are heavily weighted towards the bearish side.

If you had employed a few out-of-the-money bear call spreads over the past few weeks you should be in very good shape right now. A high-probability spread would have created a large margin for error just in case the bulls manage one push higher, but any advance over the next few days should be short-lived.

The Dow (DIA) and Russell 2000 (IWM) are officially in a short-term very overbought state with 9 other of the highly-liquid ETFs I follow. The S&P (SPY) has also joined the ranks of overbought which leaves only the tech-heavy Nasdaq 100 (QQQ) in a short-term neutral state.

END_OF_DOCUMENT_TOKEN_TO_BE_REPLACED

Now that Facebook has conquered its earnings gap, it seems to have changed the ~$27 price level from resistance to support. Given the pickup in volume over the past couple of months, this might be poised for a very good 2013.

The market is at a major crossroads here. Lately it seems that nothing can hold the market back – – – the failed fiscal cliff talks mean nothing; the absolute impossibility of the United States ever honoring its debt without hyperinflation means nothing; the fact that the market is propped up by nothing but the Fed means zilch. We are still afloat.

But the head and shoulders pattern, marked in red, is now being challenged by its upside-down twin. I imagine that the Fed's announcement tomorrow will resolve this challenge swiftly.