Thanks to the likes of Ben Bernanke, Harry Reid, and John Boehner, you give the market a near impossible task on holding otherwise solid gains when these three blathering glory hounds step in front of the camera.

With that said, the gains that the SPX was experiencing with price establishing a higher-high now could be compormised if the market continues to head lower as it has for much of this afternoon.

Nonetheless, I've got a couple of setups for you to look at for today's lazy trades.

The first comes from Chipolte Mexican Grill (CMG) which is consolidating nicely near the highs and on the verge of a breakout if price gets back above $278/share. The short setup is with LG Display (LPL) is sporting an inverse head and shoulders pattern that is testing the underside of this market here.

I also went long on BSBR today which was a long setup that was highlighted in yesterday's Lazy Trades by getting long at $7.03.

END_OF_DOCUMENT_TOKEN_TO_BE_REPLACED

The Fed's new monetary stimulus program announced today
(Wednesday) is geared towards shoring up the housing/mortgage market which, they
hope, will, in turn, stimulate consumer/corporate/investor confidence and job
growth. This has been their intent since they began a variety of monetary
stimulus programs in 2008.

In this regard, it may be prudent to monitor
the relationship between the financial markets and the SPX, and the housing
markets and the SPX, in order to (generally) gauge the strength of market faith
in the viability of such an outcome as we go forward over the next year. No
doubt, these markets may produce short-term volatile reactions to various
economic data points as they are released during this period. What will be of
interest is whether any one particular release affects the general trend in such
a way as to produce a reversal.

As such, I present the following two
Daily ratio charts of the XLF:SPX (Financials
ETF) and the XHB:SPX (Homebuilders ETF). At the moment, both
the XLF and XHB Sectors are trading weaker compared to the SPX. The RSI
Indicator has been in decline since September of this year. The XHB is
relatively weaker compared to the SPX than is the XLF. In the near term, a drop
and hold below current support on XHB:SPX, together with a failure to regain and
hold above current resistance on XLF:SPX, may lead to a pull back in both of
these Sectors. Furthermore, a drop and hold below the 50 sma (which serves as a
support level on the general uptrend) may signal a trend reversal for both
Sectors, which could send price down to the 200 sma…ones to watch over the
next weeks and months. 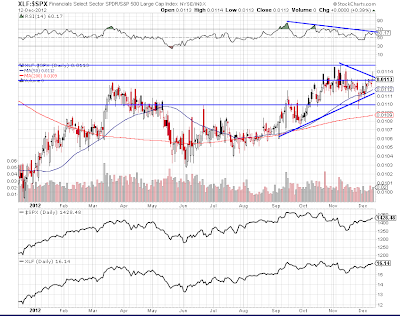 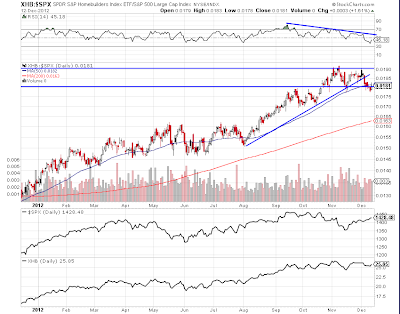 Did I mention money supply?

Inflation is the act of inflating money supply.  The cost effects
will show up later, somewhere or everywhere, eventually.  The FOMC just
acknowledged the ending of the sanitary half of Operation Twist, while
keeping the other half – the inflationary half – intact and ongoing.
Inflation is a little below their objectives after all… ha ha ha.

See the beautiful consolidation of the graph above.  That is called a
bullish consolidation.  With T bonds indicating a deflationary
backdrop… ha ha ha… there is no longer any public outcry against the
inflators.  Where are the angry mobs of austerity now?  Blabbing about
the Fiscal Cliff is where they are.

‘How you like me now??’ Ben has said to the gold bugs for nearly 1.5
years now.  Well, he just became passive toward the gold bugs once
again.  Gold has been in a pretty consolidation as have the Twisted
Yield curve and that graph above for 1.5 years.

Yesterday's announcement – pending the completion of the final Twist remnants – clears the way for the consolidation to break.