Well, my friends, I am chartless tonight. That is to say: the good folks at Ameritrade are doing some kind of scheduled upgrade, and thus all us ProphetCharts users are resigned to a chart-free evening. (Back in the day, when I ran Prophet.net, I did upgrades like this during the middle of the night on Saturday so I didn't impact people as severely…..but I digress).

It's no big deal in any case. My view on the market really hasn't changed at all, so I don't have much new to say (except to thank my lucky stars to have covered my CBOU short last Friday, for no particular reason; when I saw they decided to go private today, shooting the stock up over 30%, I was relieved to have no position at all).

I will, however, share a thought or two about something that's been on my mind. Over the past few days, I've been doing a bit of tax planning, since we're drawing near the end of the calender year. It struck me, quite frankly, what a small income I had this year. Now I am acutely aware of my finances; I have a family to support, and I am very much a self-employed person. But as I added the figures up, it dawned on me what a dramatic diminishment my own take-home income had been experiencing (suffice it to say, the latest proposal on raising taxes for those earning over $400,000/year doesn't have me concerned).

I vaguely recalled, during my days as a Senior VP at Investools (owned by Ameritrade) having a few years of being an honest-to-God executive, complete with year-end bonus. I grabbed a few file folders from years passed and looked at the year 2008 and was stunned to look at my old return. I had to ask myself: I made that much?

It struck me as odd. First off, I don't know where all that money managed to go. It's way, way, WAY more than I'm making now, but my lifestyle hasn't changed one iota (nor do I worry these days whether or not I'm going to write a check that's going to bounce). Second, I felt kind of proud for being perceived as worthy enough to be paid that well, but at the same time, I was shaken by the trajectory of my income over the past several years. At this rate, I should start hunting around for a good-looking shopping cart. Extrapolition can be a nasty thought-pattern!

But seriously, I live in a place that is simultaneously surrounded by wealth and hardship. In my social circles, I know people that rent, and I know people that live in twenty-million dollar mansions (the real deal; not McMansions; but the holy-crap-look-at-that-place kind of mansion). I know families in which both spouses work hard to make ends meet; and I know families that could have stopped working years ago, but choose to keep working full-blast, because they love what they do.

For myself, I'm neither rich nor poor, but I am, in my work, usually content. That has been, I feel sure, an expensive insistence on my part; that is, my personal requirement to love what I do has, I suppose, cost me a lot of cash over the years. If I were the sort that would be willing to travel constantly, manage a group, go to meetings, and do whatever else a given corporation insisted I do, perhaps I'd have more in the bank. (Or perhaps not; my bizarre fixation on charts compelled me to build, grow, and sell Prophet, so maybe that makes up for it).

So, as I said, I'm neither rich nor poor, and it's likely I'll never be either of those in my life. But I'm here because I want to be here. I do this blog because it gives me pleasure. I created the comments system because I love our community. I'm working on SocialTrade (and, believe me, you're not going to recognize it in a couple of months) because I take joy in the act of creation. All these things together pay me peanuts, but as long as I'm able to support my family, there's more to life than having the biggest bank account on the block.

So you're stuck with me. And maybe one day I'll somehow chance into another nice payday like I did with Prophet, although I'm not counting on it. But let me at least say – – once again – – how grateful I am that you are here, and how excited I am about what we're going to do with the world of Slope in 2013. Good night.

Two excellent swing trades today. The first one Zipcar (ZIP) can be jumped on now at $8.61. The second one, Smith & Wesson (SWHC) you'll want to wait for a bounce back into resistance before getting short.

A quick note on the latter, you'll want to make sure that you recognize that there is a lot of emotion in this stock right now, with the tragic events that took place in Newtown, Connecticut and the possible gun control legislation that might get pushed through, which will undeniably effect SWHC and other related stocks like RGR.

As for the ZIP setup, this stock has ain incredible amount of overhead resistance it is finally breaking through at $8.61. Key is for us to finish above that level today, as it will likely bring new traders in on that play. Be sure to check out Ryan's Swing Trading Strategies at SharePlanner.com

One of the things I hope to convey with my little blog here is a love of great music. Beethoven's only opera, Fidelio, has a closing finale that sends chills through my body every time I hear it. Below is a rather modern production of it (for some reason, one of the main characters is dressed as the Joker, which should give BDI a reason to watch it). At a minimum, play it in the background to enjoy the music, but if you have the time, enjoy the video as well. It's absolutely marvelous.

The EUR/USD forex pair is approaching a confluence of
resistance at 1.3200-1.3250ish as it rallies towards the underside of a former
"diamond" pattern/apex, as shown on the Weekly chart below. I'd
expect to see a bull/bear tug-of-war around this level before it either
continues upward, or reverses somewhat.

It is, currently, still under
the bearish influence of a moving average "Death Cross" formation and, as
such, is subject to further (and, potentially, large) downdrafts. Caution may be
warranted at the moment, which may negatively affect, and produce a drag on, any
bull scenario in U.S. equities, in the near term. 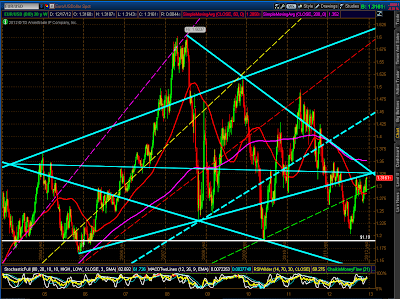 No, no, I'm not referring to Richard Simmons on a PCP-bender. Instead I am referring to the almost-went-bankrupt-in-1997 and destined-for-trillion-dollar-market-cap stock Apple, Inc.

I bought a big slug of AAPL at about $509 and saw it shoot higher. I'm nervous about being long anything in this market, however, so I dumped it for a profit a few minutes later. Good thing too. As "oversold" as AAPL is, this thing continues to fall to pieces, threatening to break its $500 level. (One can only imagine the hoards of folks who paid over $700 for this thing and are getting increasingly pissed-off).

Let's turn to Monty Python for advice on how to deal with attacks by fresh fruits: