Well, it seems pretty clear that whatever "solution" is conjured up by Washington is going to be some feeble, watered-down, doesn't-really-solve-anything compromise. The US dollar is starting to fall to pieces and, incredibly, as sick as Europe is, the Euro seems poised for a hearty rally. At this point, I'm starting to think 2012 is pretty much over and done with. We've seen the rest of the year already.

Yesterday was a very nice day on the long side. I led with the nice bull setup on ES with a target in the 1427 area in the morning and that target was made by the close. I went long shortly before I capped that chart and closed out after the close so I had a very good day.

What now? Well short term the odds favor gap fill and some retracement today and the short term rising support trendline on ES from yesterday's lows broke a couple of hours ago, so ES may well be topping out short term before that likely retracement closer to the open. Looking around longer term I'm seeing mainly bull setups here, and I'll run through some of those.

On the daily chart SPX is approaching resistance in at the upper bollinger band in the 1435 area. In the event that we are starting a trending move however, and yesterday's move did look impulsive, that just means that SPX would start to push the upper bollinger band upwards. Strong support is in the 1411-16 area at the middle bollinger band, and the 50 and 100 DMAs, and I'll be leaning bullish overall as long as that area holds: 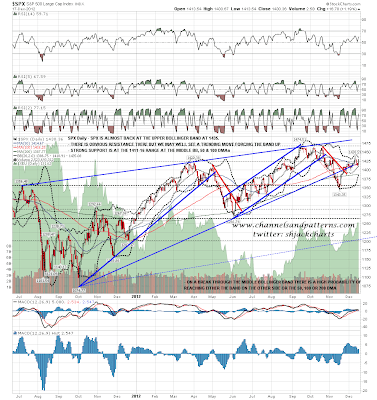