Today's post will be in sharp contrast to the "bear worries" post I did last night. I do think there is still some hope for us beleaguered equity bears, in spite of the fact that the apparent utter collapse of fiscal cliff talks has had virtually no meaningful effect on the market. I would have fully expect the S&P to be in an unmitigated free-fall by now, particularly given Boehner's "Up YOURS!" press conference today.

The fact is that the NASDAQ Composite is in a different world; the wedge is broken, and it's clinging tentatively to its former support level. Don't be surprised if the market does, in fact, head into a free-fall, surprising all the numb-nuts over at CNBC.

The Russell 2000 banged out a very nice doji today.

The S&P 500 – – which, against all sensibilities, is near a recovery high – – is still beneath its broken intermediate trendline. I will say that even a big plunge in the market probably won't get us anywhere below the lows set last month.

Another tally-mark in the bears' column is the Utility index, which is starting to fall away from a well-formed top.

One big question mark is the miners. If we can manage to break the long-standing trendline, which goes back to the 2009 bottom, it will be a jumping-up-and-down sell signal. That's a pretty big "if", though, since it has reliably bounced off this line in times past.

I leave you with the closing few minutes of the Young Ones series. This, my friends, is how the Cliff is going to end.

My three Fed Stimulus Program "Canaries" are
beginning to lose steam after today's (Wednesday's) gap up and fade on
negatively diverging RSI, as shown on the Daily ratio charts
below.

Such is also the case on the European and Chinese
Financials ETFs (compared with the SPX), as shown on the following
Daily ratio charts.

Perhaps the noxious gases from
the "Fiscal Cliff" discussions are beginning to have an effect,
as traders take profits, before the U.S., potentially, goes over the cliff at
the end of this month. Both political parties seem as far apart as ever, with no
resolution in sight. 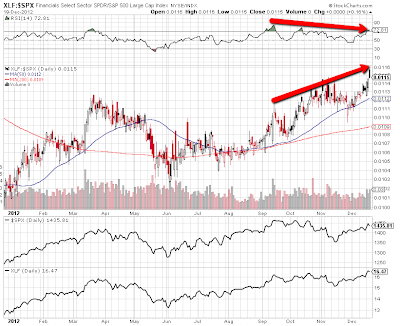 END_OF_DOCUMENT_TOKEN_TO_BE_REPLACED

Years ago, when I was running Prophet, our most important commercial client was optionsXpress, co-founded by David Kalt. Once David made his fortune selling OX to Schwab, he went off and started something totally different: The Chicago Music Exchange. I was pleased to see the “100 Riffs” video that’s making the rounds was from that very store. Check it out!