Well, look, I've got a school Christmas concert to attend, and although you should still watch my video, I couldn't neglect to at least honor this moment of Boehner-induced mayhem (did the ES really reach 1391?!?!).

Cabela's (CAB) has pushed to an attractive risk/reward ratio for a short sale.

A couple of stocks I like to follow are GS and JPM to
forecast pivot turning points in the US stock markets, particularly the SPX.

You can see how JPM and GS appear to be tracking the SPX
well and that it’s my belief that if we can track potential Elliott Wave counts
in both Goldman and JPM,we can find an edge to the US markets and use that
information to forecast major peaks and turns in the US stock markets.

If you overlay SPX, GS and JPM with each other, there is
a clear bonding between the 3 markets.

END_OF_DOCUMENT_TOKEN_TO_BE_REPLACED

Fifteen minutes before the close Wednesdayit looked like the bulls were about to claim victory for the third straight day. But, to the bulls' dismay, the bears made a last minute appearance. The push lower took the S&P 500 (SPY) from $144.90 down to $144.00, which is where it sits after the close.

The move doesn’t seem like much, but the S&P was higher almost 1.0% Wednesday, before eventually closing the day down roughly 0.75%. If the bears are serious a move below $142.50 would have to occur before they are taken seriously.

Even after the move lower Wednesday, there are still several key ETFs that are in a short-term overbought state. I am watching FAS closely and EWY, the South Korean ETF.  A push lower in FAS would certainly be a sign that the market in general is headed lower which would be wonderful for my SPY bear call spread. However, I am a but more interested in EWY.

END_OF_DOCUMENT_TOKEN_TO_BE_REPLACED

Being a contrarian sucks most of the time, because, well, you're pretty much saying "black" when the rest of the world says "white", and they'll hate you for it.

Of all the broad contrarian calls I've made, few have earned me more wrath than being a miners bear. But precious topped out fifteen MONTHS ago, as did miners, and they've been in a messy, choppy bear market ever since. Today was a pretty big deal, because GDX broke a trendline that has been supporting it since the bottom set in late 2008. That's a big trendline, boys and girls.

While I'm busy beating my chest, allow me to flip myself off at the same time. I rarely trade options, but I had bought some December $55 GDX puts a while back. I got spooked by the strength in miners (and the destruction of my beloved analog) and sold my puts at just about the worst time (see horizontal line), and they are up nearly 200% now. This isn't the first time that my charts have been right and my trading behavior has been wrong, so this is an especially painful chart for me to gaze upon. 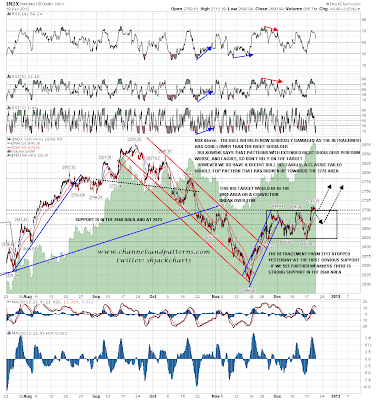