I've got to say, with a mere two trading days left in the year, and the utterly bizarre-o, Lewis Carroll-esque house of mirrors the market now inhabits, I wonder if there's even a point of offering conjecture about what's next for the market. After all, just look at what very recent history has given us:

In green, a pointless "overshoot" of the former resistance level, followed in cyan by a flash-crash out of nowhere, followed in turn by countless ups and downs with every single press conference, Facebook posting, and tweet by a member of Congress, then, in magenta, a brief return to reality (this morning) and, just as quick, in yellow, an explosive rally based upon the fact that Congress is going to be in freaking session.

Jesus, Mary, and Joseph on a biscuit.

I pride myself on a preternatural ability to blast through charts at blinding speed and find meaningful patterns, support and resistance levels, breakouts, and breakdowns. It's one of the few things I'm seriously good at. But in this market, until our nitwit legislature pushes the farce that is the United States down to the next little milestone in our road to ruin, I have to wonder if the charts even matter anymore.

This whole fiscal cliff thing is a joke. Why? Uhh, simple:

(a) The United States is hopelessly in debt;

(b) It can only continue funding its bloated, groteseque bureaucracy with trillions more of unpayable debt until the end of time;

(c) Social Security and Medicare are both insolvent and will eventually be brought to ruin;

We could really use a dictator right about now, but those don't tend to work out really well in the end either, do they?

I imagine what's going to happen Sunday night is one of two things:

(1) A deal won't be had, and the e-mini markets are going to go absolutely ape-shit; we may end this crappy year of 2012 with the nice crash that it so richly deserves, or, more likely;

(2) The feckless and spineless inhabitants of Capital Hill will, for the five billionth time, kick the can down the road with some pussified miniature "down payment" type of "solution" that gives them a few more weeks to get their collective act together (at which time no act will be gotten together, and yet another chapter of this agonizingly endless novel will begin).

Do I sound bitter? I hope not. I intend to sound a combination of frustrated, cynical, and a touch hopeless.

Half of my portfolio remains in safe, boring, unprofitable cash. The other half remains in an array of sixty-one different short positions, all obviously on the small side. In a normal market, these carefully-selected shorts would shine as hallmarks of superb bearish stock-picking. In this market, however, they are at the mercy of the insanity in which we all reside, and I shall wish each of my sixty-one soldiers the very best of fortune, although they may find themselves draped over razor wire come Monday, the last day of this utterly retarded year named twenty-twelve.

Our own beloved Dutch (aka Market Sniper) commented just after last weeks' mini-flash-crash that the ES would probably find its way down to the low of that crash in any case, in spite of the fact those lows were nailed in just a matter of milliseconds. Well, he was right again; just a few trading days later, the ES did indeed grind its way down to almost the exact low of the flash crash. Dutch nails it once more!

My post of February 28th of this year gave an 80% chance of
another spike on the VIX this year. While that scenario threatened to occur
mid-year, volatility subsided and has remained relatively quiet this year.
However, with only three trading days left, I thought I'd provide an update on
this topic.

The Weekly chart below shows the VIX
pushing up against a major resistance level around
20.00. A close and hold above 20.00 may produce such a
spike…if not this year, then in (possibly early) 2013. 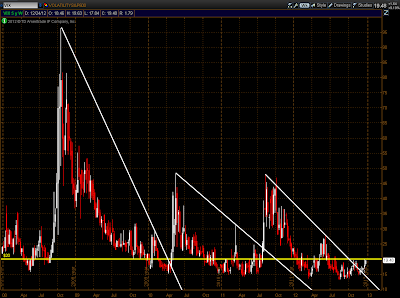 END_OF_DOCUMENT_TOKEN_TO_BE_REPLACED

The Weekly chart below shows that Japan's Nikkei E-mini
Futures Index is just below major resistance levels. We may start to
see choppy (and potentially volatile) trading from today's (Wednesday's) high of 10390 up to
10900-11300ish until it either pulls back or continues upwards.

As you
can see, it's had great difficulty staying above the 10390 level since the index
began its rally after the lows of 2008/09. We'll see whether the government's
money-printing program continues to translate into a continued equity push up,
in spite of these technical limitations/constraints. 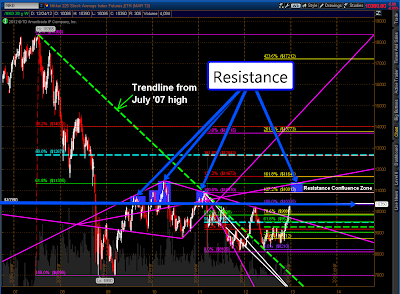