I last wrote about the comparison of three Major Indices with their Volatility Index counterparts on January 4th. While that post looked at a longer time period and mentioned major support and resistance levels, I'll provide an update for the shorter term.

As shown on the 1-Year Daily ratio chart below of the SPX:VIX, price closed on Friday at new highs. The Momentum indicator is still rising, but is approaching overbought territory — cautioning that we may see a minor pullback in the near future, although there is no negative divergence. If we do see a minor drop, followed by a higher swing high in price on negative Momentum divergence, we may then see a larger pullback — if not, then I'd look for a further rally in the SPX. 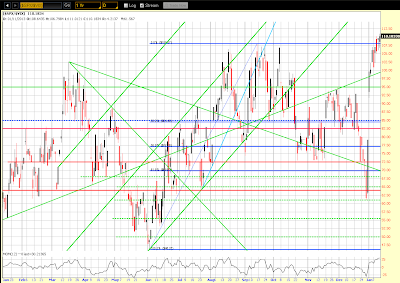 END_OF_DOCUMENT_TOKEN_TO_BE_REPLACED

You know what I mean… the rising tide of gold bearish articles now
flooding the blogosphere.  Smart writers far and wide schooling gold
bugs about how gold is going to 1400 or even 1200 as the economy
strengthens and the disaster premium is removed or as a deflationary
spiral takes hold.  Talk about opposite ends of a spectrum from which to
bear talk the monetary metal.

Yes guys, gold became sponsored by the dumbest, most knee jerky money on the planet… 1.5 years ago
at the height of the euro crisis!  Now you pile on and try to school
the masses on contrarian theory?  It really looks a lot like trend
following and wanna be heroism to me.  But whatever.

So where were these contrarians in summer, 2011 when when people
should legitimately have been concerned about gold’s dangerous sentiment
structure due to the big knee jerk into the metal?  Where were the
know-it-alls just after the recent QE3 when this was inserted into our
newsletter?…

END_OF_DOCUMENT_TOKEN_TO_BE_REPLACED

~~~
***PLEASE NOTE that in the interest of conserving space on this post, I've provided links only to my charts and graphs again this week.
~~~