The media was in breathless anticipation of Lance
Armstrong’s sit down with Oprah Winfrey. For me I had only one thing to
say:

“Thanks a lot for taking the time to remind all of us that believed you
were the subject of a witch hunt – you were
nothing but a liar. Now please do us all a great big favor – and just go
away.” However, we all know that probably is not going to happen.

What we were all able to view from the privacy of our couches was the
public spectacle that will be time stamped as the true beginning for the
rebuilding of the Lance Armstrong image campaign. Make no mistake about
it. This was all that it was. Period.

I’m the first one willing to cut someone slack for poor decisions.
Even decisions where they knowingly made the easy choice of lying
thinking they would get away with something only to be caught in the
end. To me – we’re all flawed.

We’ve all done things we regret, wish we could do over, what ever.
However this is not one of those times in my view. This was an ongoing,
well orchestrated campaign of pure deceit, lying, intimidation of
others, and more. All for personal gain. That is far different than
making a mistake.

Personally I’m sick too death of these appallingly staged mea copas.
Whether it be some politician, actor, or anyone else. It’s so glaringly
PR-101 formulated it just loses all credibility as if there were ever a
hint to begin with. (usually there never is)

So many different themes will come forth as some way to justify the
why, or the reasoning, or what ever. They’ll throw up anything as some
rationale as to why one should have mercy on their pathetic story line as
in : “Everyone else was, so – I had too!” I wonder if Vegas had a book on
how long into the interview before that line was used?

However the real issue for myself is not this chapter in the story.
For me it now has nothing to do with Mr. Armstrong – I could care less.
It’s what his actions do to all the people like myself that actually
believed in him. All of us that really believed he was the great athlete
that he claimed to be overcoming all the obstacles from a deadly
disease to push through the envelope and not only once again compete –
but win!

Although I’m not a cycling fan I like many were caught up in the
story line. It’s a great story for anyone who’s faced adversity. Then
with the time, after time, after time, of facing down the allegations of
doping while never once being found dirty. It had all the ingredients
for people to rally around as to cheer him on even more.

Americans probably more than any other country love the underdog. It
seems almost part of our DNA. And, the more the underdog gets spat upon –
the harder we rally. That’s why when it’s proven that the one spitting
was actually the so-called “underdog” a great many of us get down right
mad. However, not for the reasons many think.

The real issue for many is the way we’ll now have to look upon others
that come after this. No longer will we give leeway to their cries of
calling foul as fast as we once did. People like myself that like to
give people the benefit of the doubt more often than not will now not
offer it as quickly. This will act as a reminder when ever a situation
comes up as in: “Yeah they might be telling the truth but, remember the
Armstrong deal?” And that just ticks people like myself off.

Here’s what I’ve learned over the years: It’s not the actual deed or person whom first wronged you that you’ll stay mad at. It’s the way you must now treat everyone that comes after that gets you the most upset.

And that is the real issue or damage people like Lance Armstrong leave in their wake.

Back in November, when Apple was about 40 points higher than it is now, Tim wrote what now looks like a prescient post about how the stock's best days were behind it ("How Apple Became Japan"). Here's how Tim concluded that post:

As for the stock price, I suspect it'll resemble the Nikkei chart found
way above, although perhaps not as dramatically. I imagine AAPL will be
in the low 400s next year and will meander around relatively trendlessly
for years to come. Its multi-thousand percent gain will be a part of
financial history, just like similar gains enjoyed many years ago by
RIMM, CSCO, and YHOO.

END_OF_DOCUMENT_TOKEN_TO_BE_REPLACED

As shown on the Weekly charts and 1-Week percentage gained/lost graphs below, all but one Major Index closed higher on the week than the prior week. The Dow Transports Index gained the most, while the Nasdaq 100 lost a minor amount. 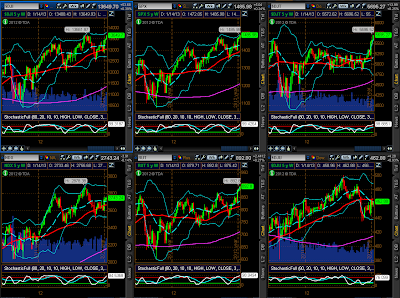 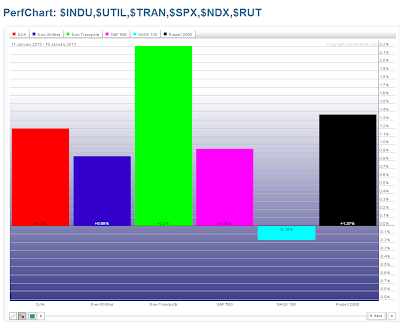