AAPL blew straight through the support trendline from early 2009 at the open yesterday and is now very close to testing weekly (LOG) rising channel support from 2003. This is AAPL's primary support trendline and a break below it would be a major technical break. Now that AAPL is close to that line I am refining the target to 440 plus or minus 5. If we see this trendline break I then have the next major support level around 360 and it's worth mentioning here that a percentage decline of that magnitude (to 360) from the 2012 high would be in line with the declines in both 2006 and 2008: 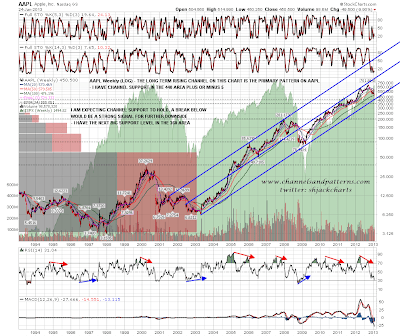