Further to my post of June 8th, here’s what has happened, since then, on China’s Shanghai Index.

The first level of major supports sits around 3000…the next around 2500…a solid break and hold below 2000 could cause major panic in markets around the world.

So far, attempts by the Chinese Central Bank to intervene and stop this falling knife have failed…we’ll see if this market can find any stability at any of the above-noted levels. There are no “buy” signals at this time on the RSI, MACD, and Stochastics indicators — rather, they are still bearish, although quite oversold; however, the extreme bearish force of the MACD, in particular, should be respected, as we could, very well, see much more selling in the short term. 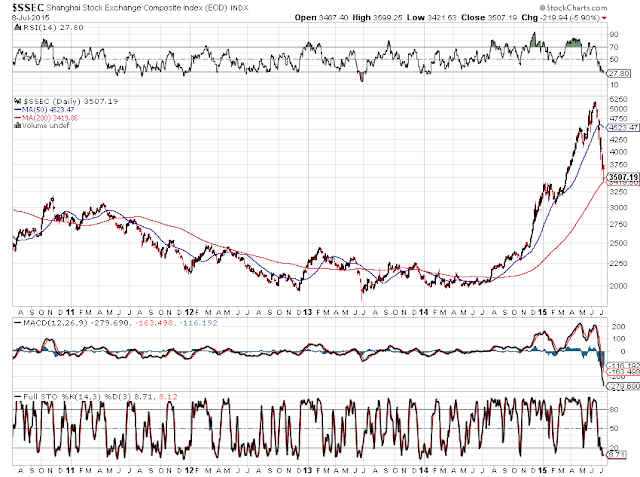 END_OF_DOCUMENT_TOKEN_TO_BE_REPLACED

Going into 2016, the data points to a 9-11% increase in healthcare costs.  Let’s not get bogged down into who will bear this cost, let’s just agree it will not be good for Employers, consumers, and State Budgets.

The GDP of the U.S. is approximately $17 trillion.  Healthcare is 17% or approx $3 Trillion.  This increase transfers $200 billion additional dollars out of consumers (as a tax, or employers as a cost, or States as an expenditure).

This is on top of an expected flat to 2% revenue growth expected next year.  Consumers will stop spending on other things or take the tax and drop out, employers must grow $10 dollars of revenue for every dollar of the increase they will absorb, to simply keep EPS the same. At 8% of GDP for Employer portion of Health costs, that is $100 billion in new revenue.  That is nearly a 6% growth in Revenue just to run in place.

END_OF_DOCUMENT_TOKEN_TO_BE_REPLACED