At 7:45 am ET on Thursday, December 3rd, markets will know what the ECB will do with its interest rates until its next meeting in 2016. Mario Draghi will give a press conference at 8:30 am ET to explain the details.

Based on the Year-to-Date graph below, which shows how Europe’s Major Indices have fared compared with U.S. Major Indices in 2015, I’d wonder why the ECB would think that it has to pour on more QE stimulus, as many media pundits are predicting…we’ll see what happens. 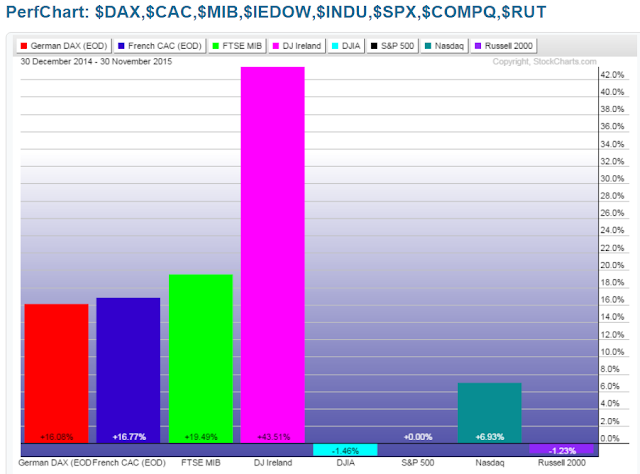 What is interesting is that the new high was not confirmed by my daily RSI Momentum Gauge, which actually peaked back on Nov 6 at 99.35.

This is a warning that DXY could be nearing, or at, an exhaustion area prior to a significant correction.

END_OF_DOCUMENT_TOKEN_TO_BE_REPLACED

I have the privilege of being a neighbor of Mark Zuckerberg (although I admittedly haven’t seen him around as much as I used to back in the days of Prophet), and for understandable reasons he is far and away Palo Alto’s most famous citizen. He also happens to be the 7th richest person in the world, with close to $50 billion in Facebook stock.

I was heartened to read just now (or “moments ago”, as ZH likes to say) that he has announced he plans to give away virtually his entire fortune (at least 99%), which coincides with the birth of his first child, a girl named Max (!)

This astonishing act of sharing will hopefully be an inspiration to other zillionaires. I think Zuck has wisdom beyond his years, because part of him recognizes that his founding of Facebook was largely a matter of very good timing and very good luck. The fact that Facebook didn’t exist until Facebook (the commercial Internet had been around over seven years already) is pretty amazing in itself.

Let’s just be collectively thankful that Mark won his legal battles against the others who claimed Facebook was their idea and their property. I daresay that I would not be typing up a post right now congratulating the Winklevoss twins on their generosity in giving away 99/% of their assets had they prevailed in their assertion that Facebook was, in fact, their creation. Congratulations, Mark and Priscilla!