One gauge of market sentiment that I look at from time to time is my chart grid of Foreign ETFs, showing the daily ATR on each ETF (the white histogram at the bottom of each ETF)…an extreme high ATR can often signal capitulation and a reversal of recent general trend.

From the chartgrid below, we’re not seeing that extreme, yet. In my opinion, we could very well see further downside on these ETFs, in general, for awhile longer.

Note: This article assumes the reader knows the reasons we are now bearish on the Semiconductor Equipment sector. NFTRH subscribers definitely do and NFTRH.com/Biiwii.com readers should as well. Readers who have been around a few years also know that we became bullish on the Semi’s in Q1 2013 from much the same reason, in reverse, we are becoming bearish now.

This article was originally and simply titled ‘Market Management’ as the opening segment from this week’s NFTRH 372. We then covered US and global stock markets and precious metals in detail, along with brief but ongoing negativity about commodities (but also what to look for regarding signs of change), a currency update and extensive market sentiment and indicator updates.

As noted recently, my trading had become problematic because I do not have the time, inclination or even the raw talent to day trade, which is what this market has seemed to demand lately. There is no better illustration of the reason why trading has been difficult than what happened on Tuesday through Friday as markets popped up to challenge the recovery highs, tanked hard, seemingly launching the bear view and then ramped again toward the highs on Friday (on a policy maker’s jawbone, what else?).

END_OF_DOCUMENT_TOKEN_TO_BE_REPLACED The following 5-Year Daily chart depicts Light Crude Oil (as the primary instrument in candle format) and the S&P 500 Index (as the secondary instrument shown as a black line). There was a drastic shift in sentiment between these two markets when they began to diverge in mid-October, 2014.

While the price of Oil is making lower swing lows in its depressed downtrend — and, in fact, made a new 5-year low today (December 7th) — the RSI and PMO indicators have been making higher swing lows but have yet to make higher swing highs. So, while we’re seeing possible hints of higher prices to come at some point in the future, it may be awhile yet before prices begin to stabilize, first. High-than-normal volumes this year haven’t yet produced stable prices and may have contributed to the large swings in between 37.50 and 62.50 that we’ve been seeing. Until we see a sustained drop in volumes, we will likely see Oil continue to plunge to further new lows and/or persist in its wild daily erratic bearish and bullish spikes. 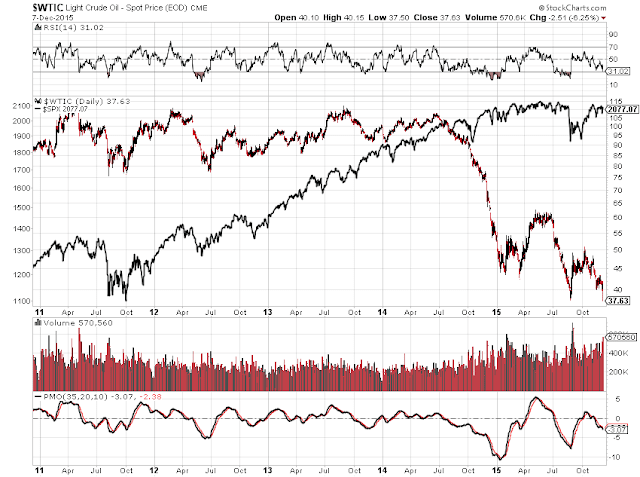 This morning, I finally got it right.

EVERYTHING was going my way right at the opening bell. Crude was collapsing. Equities were down hard. Huzzah.