The Momentum indicator on the SPX:VIX ratio is at a new life-time high and it’s going parabolic, as shown on the Monthly chart below. 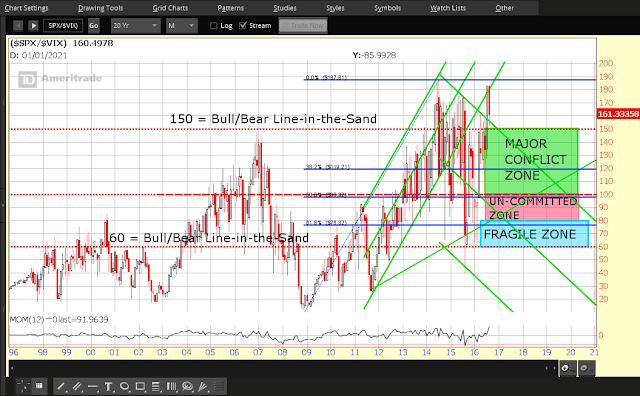 END_OF_DOCUMENT_TOKEN_TO_BE_REPLACED

I had a terrific day – – the best in a long time – – but I have very little to say about the markets. The sectors I am short are doing especially well (energy, banks, and – – as Slope Plus users know – – airlines) and I find what’s happened with the ES recently fascinating:

Specifically, we had a false bullish breakout on Sunday/Monday (green tint) and then we failed support (magenta) today. Most importantly, during the inevitable and totally stupid end-of-day buying, it went precisely back to the level which is now resistance. God willing, it’ll hold, and we can have more than one stinking day of a down-move.

Finally, some people freaked since Gartman ostensibly went bearish. He didn’t.  For those who actually bother to watch the clip, they’ll see it’s just usually the mushy-wushy, namby-pamby stuff, which means no one can pin him down on being wrong later, and he specifically says he is not short ANYTHING. So if you think that’s bearish, well, fine, it’s your funeral. END_OF_DOCUMENT_TOKEN_TO_BE_REPLACED

SPX has broken range and double top support at 2159, and then the daily middle band at 2155. If bears can now hold that 2155-9 area as resistance today then there are decent odds of a trend down day and the double top target is in the 2140 area. A close below the daily middle band opens up a move to the daily lower band as the obvious next target, and that is currently in the 2111 area.

If the bears can’t hold the 2155-9 area as resistance then this may just be the low before the higher high, and we could still see the 2190-2 test that I was looking at yesterday morning. SPX 60min chart: END_OF_DOCUMENT_TOKEN_TO_BE_REPLACED

Back when I was a youngster and had first moved to California, I saw ads for Alpha Beta supermarkets all the time, such as this one: