Well, since my last post on the SPX:VIX ratio, we find that, after true-to-form recent volatility in between 150 and below 100 to just above 90, it has, once again, spiked upward, broken and closed above 150, as shown on the following Monthly ratio chart.

The Momentum indicator has rallied and is, again, back above the zero level, which now favours the bulls on this longer term timeframe. 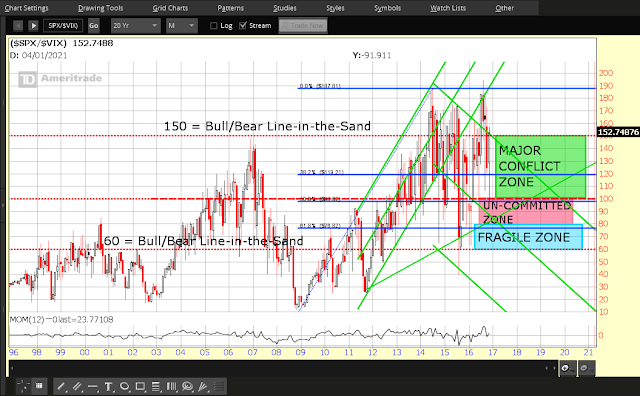 END_OF_DOCUMENT_TOKEN_TO_BE_REPLACED

Last week was one of those in which, had you known what was going to take place, you could have turned $10,000 in a million. There was so much insanity between the “all clear” letter from the FBI (doesn’t that seem like ten years ago?) and the close on Friday, multi-thousand percent profits would have been feasible.

One easy example is the triple-bearish-on-miners ETF symbol DUST. Had one bought this Wednesday morning, based on the notion that a Trump victory would make gold unappealing, they would have been looking at over a 100% just two days later. (My Slope Plus subscribers have been enjoying a fantastic ride on miners shorts since October 19th. Gold might make a small recovery, but I think miners are heading MUCH lower. There are more Trump Towers being erected by certain indexes (ref. Uncle Buck’s pants tent noted yesterday in an HUI update).  As an aside, say what you will about the man, but the name and the persona are a natural for we financial writers and others not tasked to be sensitive about politics or politicians.  I mean, how much fun could one make of Obama, a person who comes across as dignified and idealist?  Bush was a little better, but even he was no Trump.  The Clintons?  Getting warmer.  But Trump is a new thing all together, almost transcendent; more concept than man.  I like this, speaking as a writer.  Love it, actually.

On a more serious note, I think he is eventually going to be seen in a lesser light, as the true believers who thrust him upon their tired shoulders find out that promises are one thing and reality is quite another; if anything, he will deliver inflation, which adversely affects… anyone?  Bueller?…  the middle and lower classes.  Asset owners – like Trump – always win and those who go paycheck to paycheck, always lose in inflationary/reflationary regimes.  So if the hype proves true and exported jobs are repatriated, roads, bridges and walls are erected, tax breaks for big corporations are implemented and yet more deficit spending is enacted, it is not the true believers who are going to benefit.