It looks like a a massive reverse Head & Shoulders formation could play out nicely if GOLD can break and hold above its neckline (and converging 40% Fibonacci retracement level) around 1376, as shown on the Monthly chart below.

Longer term, we could see an eventual run up to converging major price and 60% Fib retracement resistance around 1600. Watch for, not only a continuing rise on the Momentum indicator, but also an increase in its velocity, should we see such a sustained neckline breakout, as confirmation of bullish commitment. 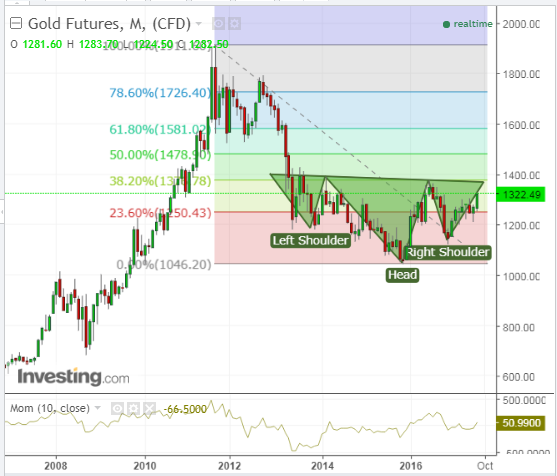 I don’t think there’s ever been a single stock I’ve suggested as a short more than Finish Line (symbol FINL). My poor tastytrade viewers probably got sick to death of hearing about it, but it’s one of the most amazing topping patterns I’ve ever seen, and given how far it’s fallen, I doubt anyone’s bitching about my frequent mentionings of it.

One problem I’ve had as a trader is covering shorts too soon. One great example is Chicago Bridge & Iron, which I yammered on about endlessly as well. It did indeed fall hard, and I took my profits. The problem is……….it won’t stop falling. END_OF_DOCUMENT_TOKEN_TO_BE_REPLACED

As I wrote to my PLUS members on August 24th regarding junior miners, “..…as I look at the miners, I’m seeing signs of life. If you believe the breakout is meaningful and want to amp up your commitment, a good way to do it would by via the triple-bullish ETF symbol below, which itself has had a clean breakout from a rather long downtrend.”

Well, it didn’t take long for this to blossom, as gold has broken out smartly………

END_OF_DOCUMENT_TOKEN_TO_BE_REPLACED

We’ve all seen the tales and photographs of death and destructions from Harvey……. …..which, naturally, in this psychotic market of hours, has meant equities have been creeping up all night long…… END_OF_DOCUMENT_TOKEN_TO_BE_REPLACED