I was quite enamored for a while with O’Reilly Auto Parts (symbol ORLY) as a short. In that magenta-tinted area below, you can see a wonderful topping pattern. And, as it’s supposed to, the price fell tremendously. Then it climbed……..and climbed……..and climbed. And, frankly, violated its pattern so massively that I almost totally lost interest.

More recently, however, there’s been a smaller top (cyan tint), and I shorted this last week. So far, so good. ORLY’s past behavior makes me skeptical about how well this will go, but for the moment, it’s a pretty clean setup (and, as before, I remain stunned how a company that has hundreds of retail stores selling auto parts and cans of motor oil can be this highly-valued). END_OF_DOCUMENT_TOKEN_TO_BE_REPLACED

In our Sunday Chart Chat I was looking at an attractive scenario for this week where ES/SPX would make a higher high this week to complete a possible IHS forming, break up slightly from that and then fail back into a minimum target at last week’s low at 2553.80, also the target on the Three Day Rule triggered by Friday’s clear break back below the 5dma on SPX.

What is a Janus Flag? It is a bull or bear flag that looks like a reversal pattern forming, breaks up (or down) and then rejects hard into a retest of the previous low (or high). END_OF_DOCUMENT_TOKEN_TO_BE_REPLACED

I don’t normally make a post that simply references someone else’s writing, but I am going to do so in this case. I stumbled across this article, which addresses something I’ve always found really curious – – that is, why cryptocurrencies peaked PRECISELY when futures on them started trading.

END_OF_DOCUMENT_TOKEN_TO_BE_REPLACED

Here’s a short I’ve got that I don’t think I’ve ever shared before……. China’s Shanghai Index remains firmly ensconced in a large sideways consolidation zone in between major resistance at 3368 and major support at 3000, as shown on the following monthly, weekly and daily charts.

The momentum indicator is below zero on the monthly and weekly timeframes, and is just above it on the daily. In the short term, watch for a hold above zero on any rally that may continue from tonight’s action following on from President Xi’s speech to the BOAO Forum for Asia which finished a short time ago. 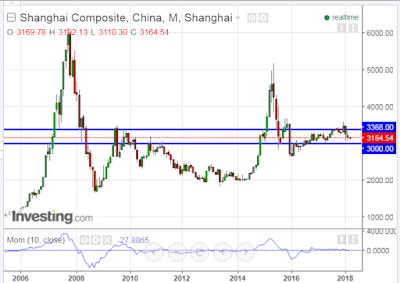 END_OF_DOCUMENT_TOKEN_TO_BE_REPLACED

Here’s how I picture the equity markets at the moment: there’s a large indoor arena. There are two opponents: a bull and a bear. And there’s a ball that they’re trying to hang on to (or steal from the other, if they don’t have it). And not just any ball. An exploding ball. The ball explodes when there’s a big piece of news, and when it does, the opponent is able to wrest it away from his opponents.

Oh, and the arena is pitch black except for some frantically-active strobe lights.

With that image in mind, you can see how things have been since January 26th. Just absolute chaos, with no one the clear winner. The bulls have the ball but then BOOM! the news hits about tariffs on $100 billion in goods. The bears snatch it away but then BOOM! Mnuchin assures them it’s just a negotiation, and everything is going to be fine. Uh-oh BOOM! the offices of Michael Cohen get raided, so the bears get the ball back. And, instantly, BOOM! the head of China issues a soothing speech, allowing the bulls to take control again. END_OF_DOCUMENT_TOKEN_TO_BE_REPLACED