In my Tesla, I can play any song in the world just by saying “Play {whatever}“. After it plays the song, it’ll continue on with similar songs. So if I ask for a certain Broadway hit, then it’ll keep playing Broadway stuff forever.

For some reason, when I was listening to whatever songs it was picking, it started playing this totally bizarre piece called the Battle Hymn for Lt. Calley. I don’t know a tremendous amount about the Vietnam War, but I certainly hope you’ve heard of Lt. William Calley who was court martialed for murdering 22 Vietnam civilians (mostly women and children). His name became synonymous with evil, and years after the incident he finally expressed deep remorse.

Anyway, for some reason, someone thought very highly of the Lieutenant and made this song praising him. It would like me writing “Hats Off to John Wayne Gacy”. Anyway, believe it or not, here it is:

The GDX/COPX ratio has broken above the 50 & 200 day moving averages and is still going, despite gold’s ignominious state at the moment.

END_OF_DOCUMENT_TOKEN_TO_BE_REPLACED

Yesterday, for no particular reason, I fired up the original Henry Mancini Pink Panther theme. I was transported back to when I was a little kid and saw the movie on television. After the credits, I was tremendously disappointed to realize it wasn’t a full-length cartoon (back in the 70s, of course, the Pink Panther was a staple of Saturday morning cartoon shows). In any case, it’s a great song, and these must be some of the best titles ever created for any movie:

Greetings from flyover country, as I make my way to the Mississippi River. It’s a quiet day in the market, with the ES struggling between a little red and a little green, and not one of my 80 shorts has been stopped out. I’m grateful for a quiet day, because it would be an nightmare in this tiny seat on slow WiFi otherwise.

I’m about to thumb through all 80 positions to update my stops, but one company in particular that caught my eye was one of those 80, United Parcel Services (UPS): 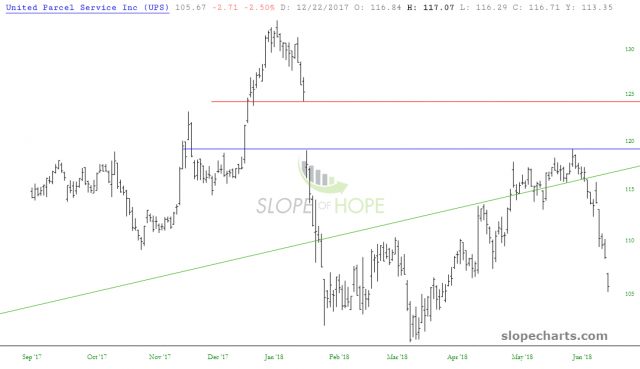