I always love reading titles to articles that tell me I am about to read a bunch of “reasons” as to why a market is going to do something. So, I thought I would write my own.

When someone presents you with such an article, this is what they are really saying:

Ultimately, the underlying premise of these articles is that a market moves based upon logic and reasoning.

So, let me ask you some questions:

With what logician did the analyst consult in order to come up with their analysis?

And, when was the last time you read analysis from a logician in order to determine the direction for the stock market? I mean, would it not make the most sense for logicians to provide analysis for the stock market if one believes that we should be looking into reasoning for the market to move in a specific direction?

END_OF_DOCUMENT_TOKEN_TO_BE_REPLACED

In this lifetime-highs-every-single-day environment we’re in, it’s astonishing that the vast majority of my short positions remain profitable. I’m not aggressive in the least right now – – about 130% of my cash buying power is being used (“aggressive” is twice that) – – and I am being very impatient with non-performers.

Here are thirteen individual shorts I am in right now that I wanted to share. This is a gallery, so you can click on any thumbnail and scroll left and right to see the SlopeCharts at a more legible size.

I want to remind everyone of Slope’s extremely unique page called Woulda Shoulda Coulda which lets you enter in any hypothetical trade and find out:

As an example, let’s say the day after I sold Prophet, I put $50,000 into NFLX, which was a tiny, tiny, tiny fraction of the cash that went into my account.

So this reveals a $50,000 investment in Netflix would be worth nearly $12 million today. This assumes, of course, I would have had the testicular fortitude to ignore a 22% drop in value and, far worse, a nearly 83% drawdown during this holding period.

I would normally be jumping off a bridge at this point, but I know there’s no way in hell I would have held on, so I’m going to let myself off the hook.

I was expecting a modest retracement in my last post and we have seen one. I was looking at the setup on the premarket video today and there is a probable short term low here testing support at the ES weekly pivot, open gap support on SPX and the 50 hour MA. We should see a short term higher high next and that will likely be setting up a larger retracement to follow. That’s working out so far.

END_OF_DOCUMENT_TOKEN_TO_BE_REPLACED

Well, that didn’t take long – – as of this writing, the entire Netflix-inspired pounding on the NASDAQ has been repaired. 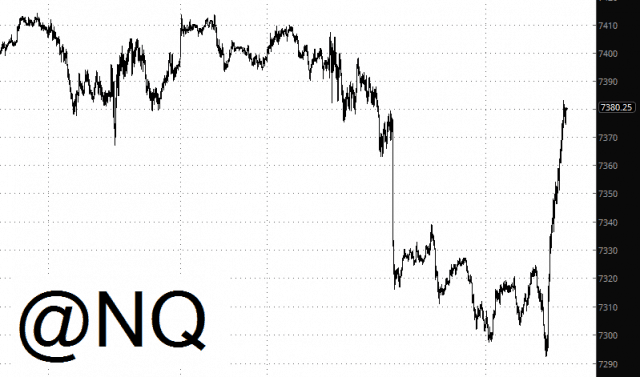