So, does my title appropriately capture the sentiment about metals right now?

While the title may seem a bit extreme to some of you, many are leaving the metals for dead, and others have already written their obituaries.

In fact, this past week, just as the metals were hitting what will likely be a bottoming in either a third wave of this decline, or possibly even all of the decline, a headline article came out on MarketWatch entitled “Here’s why gold might die out as an investment.”

Within that article, the writer alludes to the fact that since gold was not able to rally due to the geopolitical tensions around Turkey, then it is a sign it is no longer useful. However, if any of you have read my articles on this issue, you would know that history does not support the premise that gold reacts as a safe haven for geopolitical tensions. This is purely a fallacy. But, since it is regurgitated so often most of the market has taken it as gospel despite the facts suggesting otherwise.

The next premise within the article upon which he declares gold as dead is due to technology, and he is not referring to cryptocurrencies. While he is not wholly clear regarding this perspective, my assumption is that he is falling into the trap of most people in the market. Since the Nasdaq has continued to rally strongly, along with its supporting cast of FAANG, then that is clearly where younger people are going to put their money, rather than gold.

END_OF_DOCUMENT_TOKEN_TO_BE_REPLACED

Before I begin, I want to mention we’ve substantially improved the quality and speed of our real-time index data, so you SlopeCharts users will immediately start enjoying the improvement.

I promise to only mention it a few thousand more times, but please note my new book has out (which just got its first review!) so please check it out.

As for the markets, it’s pretty much what I predicted/dreaded last Friday, which is a continuation of the “melt up”. Barring some shock event (e.g. China announces the U.S. can go screw itself, and the trade war is back on) it seems the natural path of the market is simply going to be higher – – – which, let’s face it, makes sense, since it has only been going continuously up for the past nine years. Volatility is, once again, completely dead, which makes for a market more boring than words can describe: 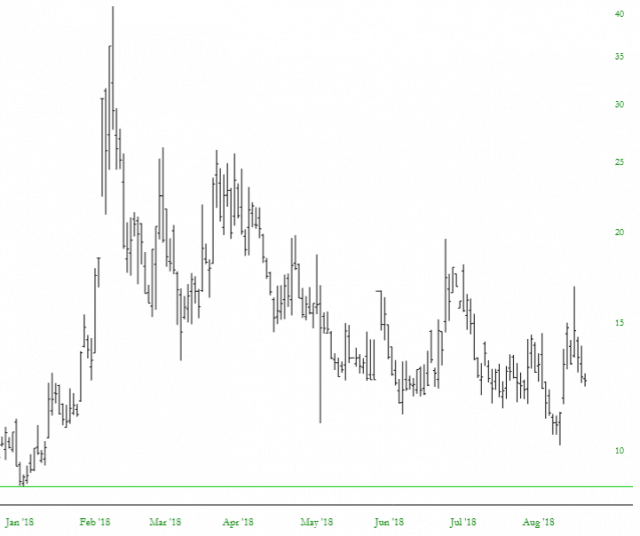 END_OF_DOCUMENT_TOKEN_TO_BE_REPLACED

The Dish Network has broken its trendline and has bounced up to resistance. I’d say it’s shortin’ time. 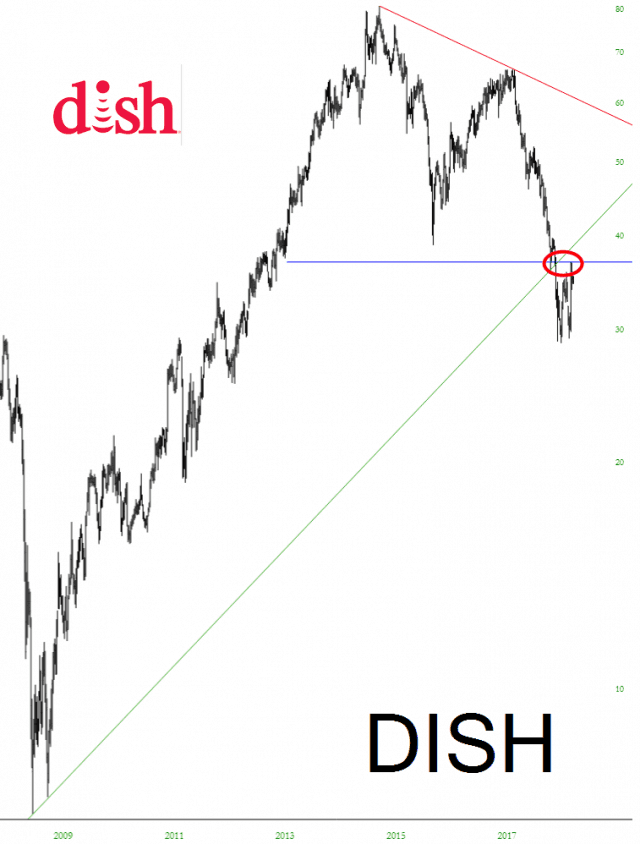 COMPLETELY unrelated remark by Tim – – I never thought I’d be able to say this, but sales of my new book this weekend exceeded the worldwide gross of Kevin Spacey’s new movie.

That was an unsatisfyingly fast low last week with none of the usual bottoming signals, but it was a higher low against the early August low, and the break under the daily middle band on Wednesday was firmly rejected on Thursday and confirmed on Friday, with a decent quality bull flag channel on ES breaking up on Friday, so that flag has a minimum target at a retest of the previous high at 2863.43 SPX, and that puts SPX within easy striking distance of the all time high at 2872.87.