As predicted here yesterday and here on Tuesday we had another down day on the SP 500. 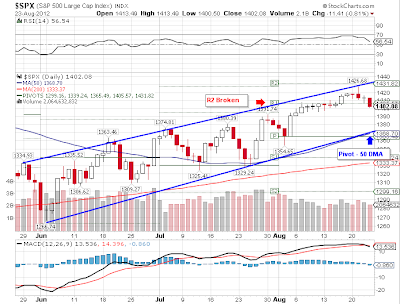 For those that don't trade the e mini futures contracts, you can either play SPY or SDS the 2x short ETF.

My choice would be to short SSO, the 2x Bull ETF, but no shares are available. 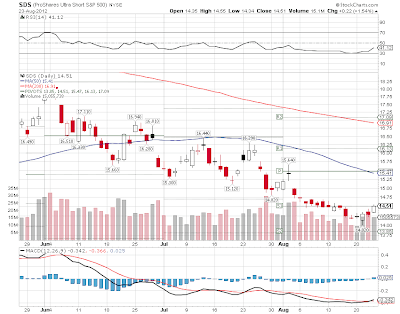 We printed a doji yesterday with a lower high and lower low. We did see a bounce off the R1 1405 area I mentioned yesterday.

My guess is today the Bulls will try to run it back up to the top of the channel early. My inclination is to short that as I don't think they have the firepower to break through R2 at 1431. I also see MACD rolling over as well as declining RSI

Of course just as finish my Bullish Longer Term assessment of the SPX – We print a shooting star which could (should) signal a reversal down in the current channel. 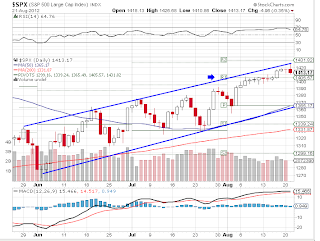 I thought we would have seen this earlier based on the swing / time frames since the June 4 Low.

If you’re playing this short the R1 at 1405 is a likely target and now support – Likewise this is a good place to buy if you believe it’s going higher.

Should that fail then the pivot and 50 DMA converge almost exactly at 1365.

I find it very difficult not to be a Bear now –

Yet the market continues to move higher. and as Jesse Livemore said so succinctly:

"They say there are two sides to everything. But there is only one side to the stock market; and it is not the bull side or the bear side, but the right side"

In this case though Price is the ultimate arbiter and price tells us the market is going higher.

Here's a three year weekly chart of S&amp;P 500. The Andrews Fork (blue), Channel (black) and trend from the June 4 bottom (green) all point one direction – up. That it broke into the upper half of the Andrews Fork off the June lows was the final decision point for me.

Even the Euro appears to be breaking out of its consolidation pattern:

When price tells me it's time to sell – I'll listen

But for now it's the Bulls Market

What prompts me to write this is today I clicked on a link in Digg and it launched a malware attack on my computer. Luckily when the pop up happened I knew what to do – which was NOT click on anything in the webpage. I just opened my task manager and stopped Internet Explorer before any damage could be done.

I'm fortunate it was a lower grade attack and that solved the problem.  I've dealt with this shit before so hopefully this may be helpful to some of you