The re-balancing of various indices' weighting of AAPL, which began Dec. 1, 2014 (supposedly by Morgan Stanley per published articles) caused the most valuable tech company in the world to retrace more than 50% of its gains from its Mid-October low.

APPL's weak bounce from Mid-December lows ended with a topping tail doji on Dec. 29, 2014, and has since followed with three consecutive daily bear closing candles.

Momentum appears to be ready to accelerate to the downside, with the TRIX about to cross over while in negative territory, the MOBO Bands in negative breakout, and the Stochastics Momentum Index near -40.

Lower targets: Mid-Dec lows, the gap up area from Oct 21, and if $95 breaks, the $80 level coincides with April 24th gap-up candle low, and a bull crab pattern completion 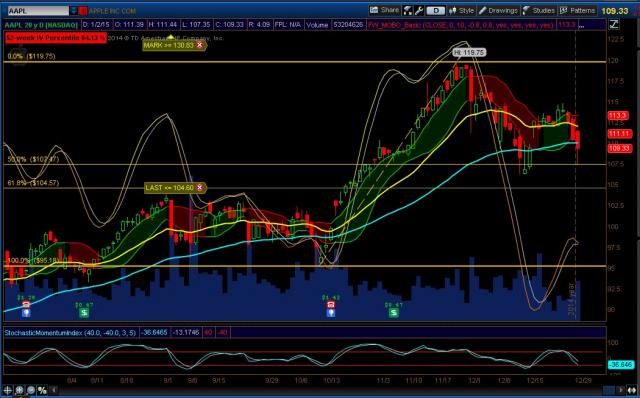