An example of what happened to pensions in the United Kingdom on Friday 24 July 2016. The percentage figures represent a single day's change. A lot of it difficult to predict. Have to confess I almost made a serious mistake but was lucky because I stuck to a safe strategy. But wouldn't it have been nice to be invested in North America and sold on Friday. The decision would have had to be made two days earlier. 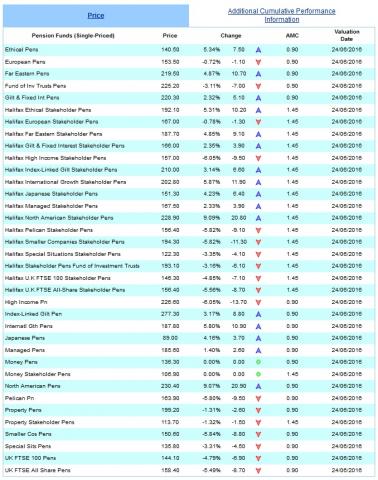 Claws
The above table should freak you out. It's one day's change on a typical British pension due to the volatility of the global markets on 24 July 2016. 6/24/16

Claws
Ouch! The restack doesn't keep the size of the original stacked image. Here is the image again so that you can see a bigger version of it.