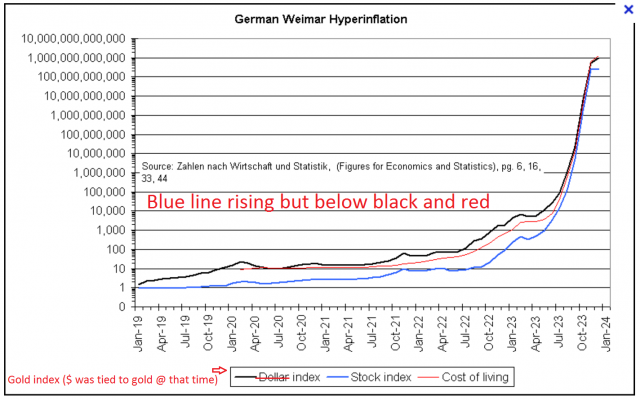 Dr.StrangeLove, Morwos
Perhaps if not enough silver and gold for fiat backing...women can be used instead... 9/4/16

Claws
The catch is: fiat is worthless, the assets themselves although they have inherent value, when they are priced in fiat they too are also pretty much worthless when you cash in for fiat. It isn't worth selling anything because the money you receive for whatever you are selling might only buy half as much tomorrow. The reason the curve goes vertical is because nobody with any sense is selling.

You can't sell anything on a curve like that. It is pointless. The only sensible way of selling anything is for physical (be it gold, silver or tomatoes). At least you know that when the fiat halves in value every 24 hours that you still have what you received and you can always eat the tomatoes.

The only way out of that gravity defying upside is by issuing a new currency that is tied to something like gold so that people will know that the currency is worth something. 9/4/16

Holy Hand Grenade
The fiat dollar still works because people believe in the US government's commitment to make good on it.
Under a Trump "reign" this will no longer be the case. He has intimated that he doesn't believe that the U.S. needs to pay back treasury debt at 100 cents on the dollar. Don't believe me? Look at this:

So, the apocalypse is not at some fuzzy distant point anymore in the future. It is in SIXTY-TWO DAYS, November 8th.
I have listened to countless crazies talking about gold for the last 10 years. I have successfully traded it as well.
But this thing, this "rough beast slouching toward Bethlehem" really is different.

I wonder why we don't talk about it more on SOH...This is, after all, a bear site, and this is about the most bearish thing we will ever see in our lifetime. A Trump Presidency will bring about a crisis of confidence toward the U.S. government, for the first time...ever.

I never, ever, thought I would hear myself say this:
If Trump wins the Presidency, THIS TIME IT'S DIFFERENT. 9/6/16
...