DXJ weekly. This is not investment advice. 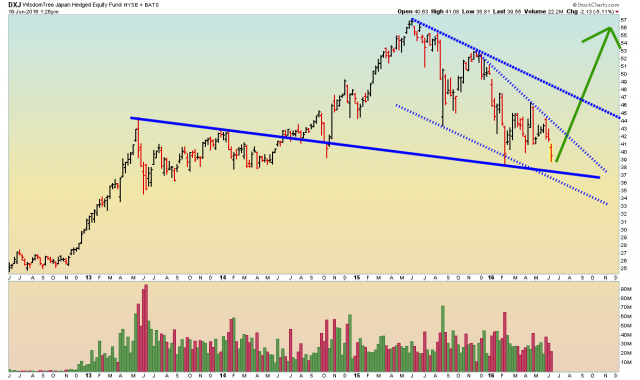 ZeroPointMind Φ
Say, if I give you a sawbuck would you redo that chart with the green arrow pointing down ? 6/16/16

Claws
10 bucks is pretty generous. Hard to resist. But the hammer of Thor has formed at the bottom of that spike down and Thor is quite willful and the only one that can go against him is The Incredible Hulk. As much as I would like to see the hammer point in the other direction it remains to be seen if anybody will locate Bruce Banner in time. Nor can the Hulk pick up Thor's hammer when he leaves it lying around in any case. It's a serious dilemma. 6/16/16

Claws
That's the biggest zero I've ever seen and I empathize with the sentiment. However, the markets have been residing in la-la land since the late 90s.

The only time they make any sense is when they are going down hard. All this floating upwards endlessly without any fundamental basis is like a work of fiction. None of it makes any sense. It never will.

The whole point of capitalism is that it is based on a free market. Without a free market it just ain't capitalism. This is more like what you would read in a George Orwell novel or experience in China. You know, something that is disguised to look like capitalism but isn't. Or the sort of free market economy you would normally expect to see in the DPRK.

What really winds me up is when people criticize capitalism when they don't realize that they haven't actually experienced it and are in no position to criticize it. Come to think of it they probably have a truer version of capitalism in the DPRK than we are currently experiencing.

The development of the EU is not enhancing the situation. It is actually making things worse. Which is why I was hoping for a Brexit to introduce a little reality to the global economy. But tragically I don't think we are going to get it.

So what was the point of fighting all those wars for freedom and democracy when we are currently faking it. It is also tragic that young people today think that this is normal and acceptable when it isn't. 6/16/16
...