A pathway for Europe... 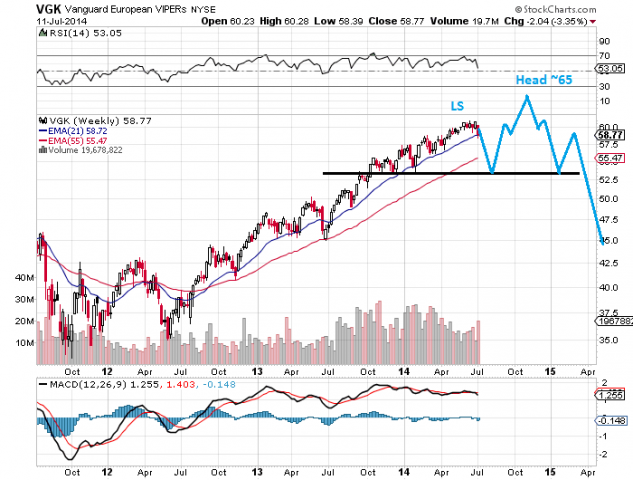 RayW http://tinyurl.com/z2xyct7
Not disputing those projections as they are possible, I just wanted to know A) what are the mechanics of a structural market psychology breakdown here at this particular point (Portugal et al?), and B) couldn't either the H&S or "W" pattern be rolled backward or forward to an almost arbitrary date?

I'm looking for a sensible reason, better than the usual "market's going down because it's up" divel we see all of the financial media.

Europe's got some hard economic weather ahead, no argument.
I'm just looking for more of the reasoning you put into these two positions.

Closing Basis - go with the flow
Holy embellishment, Batman! Now, I mean this only to help another trader out.

You cannot even begin to project a topping pattern like that without at LEAST one major retracement. Nothing wrong with that chart at all until the drawn in arrows. If that's how you analyze charts, I highly suggest not trading and keep learning/papertrading. You'll go broke doing stuff like this. 7/13/14

Closing Basis - go with the flow
I hope it wasn't you who negged me because that would show a real weakness. I told you the truth all the way. BUT not to leave a guy hanging and if you're open to learning (I hope so), here is how you read a trend change. Secret: Just look for the triangles.

It's really all about the highs and lows and differentiating them between timeframes. After that, it's much easier. I put some decent time into making this chart and it was all to help you so I hope you'll take the time to consider it.
The rest is on the chart.

fiboman
Thank you for your comments.I always find feedback very interesting.
A,B)I am using a system of fib projections and retracements(among other things) to define major resistance levels and possible reversal zones.The system is based on previous pivot points and possible future points.So my system is now flashing red for a possible reversal of the current trend of european equities (as well as ,although to a lesser extent, for SPX).The charts that i uploaded are just a pathway IF a deep correction towards 54-55 is going to materialize.I am not suggesting that this scenario is going to happen 100%.It is just a POSSIBLE scenario that I favor based on my system.Up until now I managed to produce nice net gains for my trading account.Hopefully this will last in the future.After all a system works until it does not.... 7/13/14