Drawn objects are the single most important part of the SlopeCharts platform for effective analysis and decision-making. They are also exceptionally flexible and easy-to-use.

One thing that should be noted immediately is that there are so many drawing tools, they cannot all fit on the palette, so it is up to you to choose which of these tools you would like to have immediately available. The process of choosing these tools is in the Palette section of this guide.

The drawing tools are accessed at the lower left of SlopeCharts, and a default palette is provided, although there are plenty of other drawing tools available. Its initial appearance is shown below, and clicking any of the icons chooses that tool; the default choice, the arrow, is for pointing and selecting and does not draw anything on your chart.

Below is an example chart with a few drawn objects: from left to right there is a polygon, an arc, another arc, and then a pair of trendlines, each of which are colored differently. Without these, it is much harder to interpret what is going on with any given financial instrument. Well-placed and well-chosen drawings, however, offer insights into support, resistance, breakouts, and breakdowns which other traders simply cannot see. 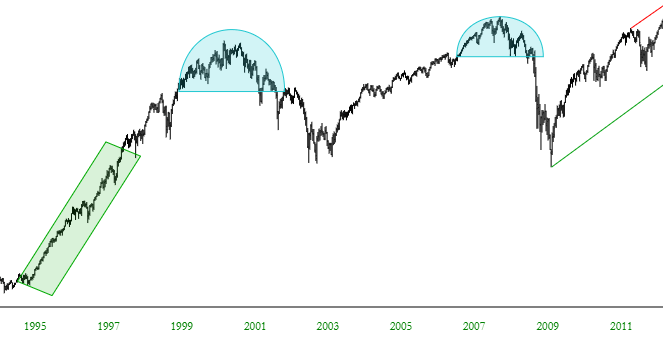 All the drawn objects have several properties in common. First of all, they have anchor points. Once you have drawn an object, you can click on it to see the points which define the location of the object. You can drag these points to change the position or shape of whatever it is you’ve drawn.

This animation illustrates a person deciding to move the location of an object that is already on the chart. He clicks on the object, which reveals the anchor points, then he drags the desired anchor point to its new location. Once he clicks anywhere else on the chart, that anchor point is released and the new positioning of the object will be retained for that chart.

The number of anchor points depends upon the object being drawn. The horizontal line, for example, is the simplest drawn object, and it requires only one anchor point (to dictate where it is on the vertical axis). A polygon, however, might contain a dozen different anchor points, depending on how you drew it.

What is consistent across all objects, however, is that you need to use anchor points to create the object, and once it is created, clicking on that object will reveal the anchor points by showing them as small squares, which you can move around the chart to your liking.

The tool palette provides direct access to different drawing objects. In order to access what tools are presented on this palette, click on the Customize button located on the lower-right portion of the palette itself.

When you click it, the dialog box below appears. This lets you, by means of checkboxes, select which tools you want included and excluded in the fourteen spaces available to you. 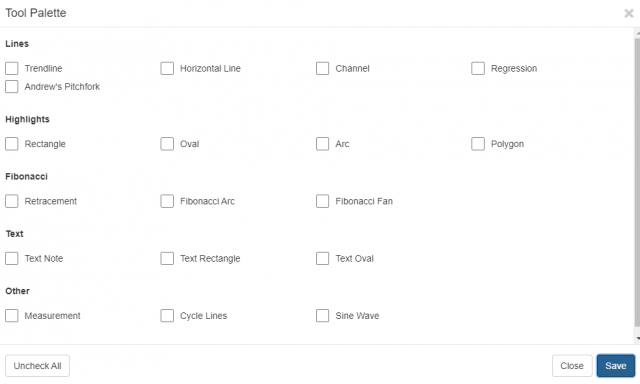 The reason there are fourteen, and not sixteen, spaces for you to choose is because two of them are required and cannot be removed: the Selection tool (arrow) and the Customize tool. If, for instance, you click the Uncheck All button in the customization dialog box, your tool palette will look like this and basically have no drawing tools at all:

A more sensible approach would be to hand-pick the tools you actually use, thus resulting in a palette which is cleaner and completely customized to your liking:

The tools available from the palette to used as drawn objects are as follows:

When you right-click on a drawn object, a menu will appear offering appropriate options for that particular object.

One choice in this menu will be to Change Style. This brings up a dialog box that lets you alter the properties of the drawn object. You can also click the Save as default checkbox to save yourself time later in case you’d like your parameters to be the default setting for tool. 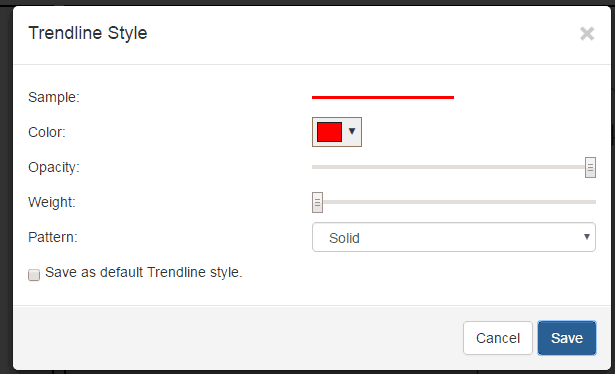 When you mouse over a drawn object, it will also reveal to you any relevant information about itself. 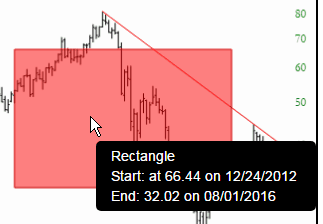 As a registered user, SlopeCharts will remember all your tool choices, your watch lists, and all your drawn objects. The more you use SlopeCharts, the more personalized it becomes to you, and the more useful it will be to you as a trader.