The ability to “layer” charts is a unique and powerful feature in SlopeCharts exclusively available to Gold and Platinum premium memberships. At first glance, it may seem to be just an other form of comparison charts, but it is much more flexible and sophisticated than that. This feature allows you to combine charts in ways that are simply not possible with standard comparison charts.

To access this feature, choose Layered Charts from the Mode menu in SlopeCharts.

The SlopeCharts screen will change somewhat to accommodate the features in this mode. The most obvious change will be the presence of a row of controls at the top, the leftmost portion of which lets you switch from one layer to the other.

Here is what each of these items does:

There are nine other buttons on the row:

By right-clicking inside the chart area, you will also see a special popup menu that has been created for layered mode:

Two special new entries are Chart Color and Label Color, which allow you to pick from any of the available colors to apply to either the price bars or the axis labels of whatever “layer” you are using. This is very useful to help make the layers of the combined chart easier to distinguish.

There are some other items on this right-click menu which are helpful when constructing a layered chart. The Y-Axis Position lets you drag where on your screen you want the Y-axis labels to go (perhaps to get it out of the way of what you are showing), and the Chart Types can be used to alter the chart to, for example, a line chart, if that makes the analog easier to recognize. You also might have it help to use the Ctrl-S (hide/show studies) and Ctrl-D (hide/show drawn objects) toggles for the same purpose: that is, to make the chart as clean and clean as possible.

Here is a simple example of applying the layered charts feature. Here we use the symbol IYR, which is a major real estate fund. We load IYR into both layers, and we zoom in to one of those layers. At this stage, the chart is a mess and yields nothing of value.

We then use the Stretch (or Resize) feature to help the price bars in blue line up better with the analog chart in the other layer. Now we have a very powerful analog chart, which makes a powerful argument that the present price action suggests a big drop forthcoming in price.

More simply, you can load different symbols in the different layers to try to find parallels between them, or instances in which one item “leads” or “lags” another.

It takes time and effort to make a good layered chart, so you will want to use the Save button to preserve your hard work, if you think you’ll want to refer to the chart later. After you click Save, you will see this dialog box, and all you have to do is give your layered chart a name. All of its properties will be preserved, such as where each layer is zoomed in, what symbols were used, how the elements of the chart were positioned, and so on.

Later, you can load the chart, or any other saved chart, by way of this dialog box, which is presented to you when you click the Load button.

One particularly useful feature in Layered Charts is the ability to browse the creations of other people. When you click the Browse button, you will be presented with this dialog box:

You can sort any column in either direction by clicking on the column header, and if you are interested in seeing the layered chart that someone else has created, click on the Load button for their entry.

What is important to note is that once you have loaded the chart, you are welcome to modify it in any way you like. Your actions will not alter the creator’s original chart (nor will anyone else be able to alter your own). Instead, you are simply providing a perfect duplicate of their creation, and you can, if you wish, modify it and save your own version with your own unique description.

When anyone creates a layered chart, the date is preserved and displayed. This gives you a way to look at the most recent charts, since you can click on the date column to sort it and see if any recent charts have been added.

You can also mark favorite layered charts by clicking on the star icon next to every one. This toggles the star on (favorite) and off (not favorite). Doing this will save you time, since you can also sort the star column and instantly see all the items you have marked as a favorite and focus on those.

Good layered charts are few and far between, but when you construct one, they can be very valuable and, hopefully, profitable.

Here are a few examples of how layered charts were used. 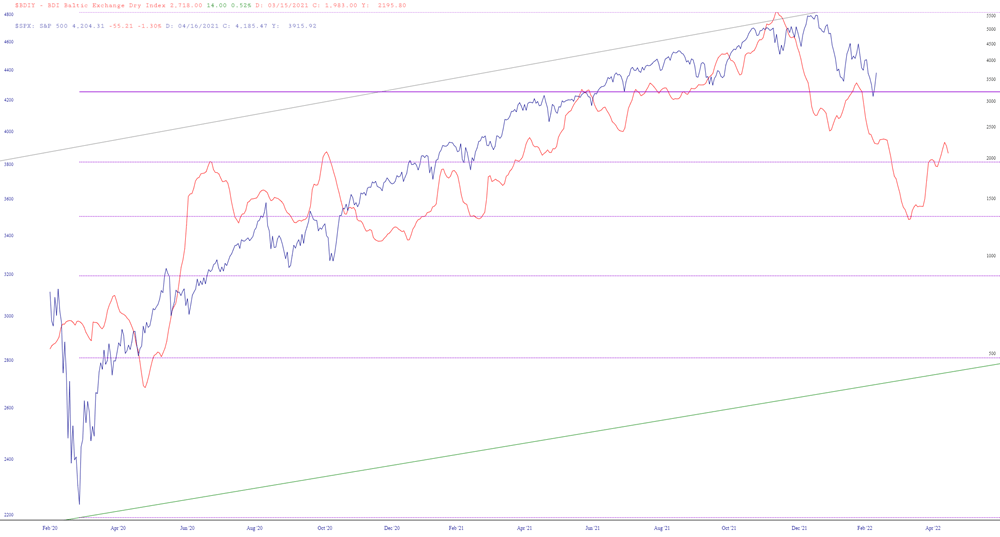 Sometimes you might find a powerful analog with two financial instruments that seem to have absolutely nothing to do with one another. Below is a perfect example of that, which is the common stock ROKU (shown in red) and the leading cryptocurrency Bitcoin (shown in blue). The “match” between the two of these is absolutely uncanny, and if $BTC is indeed fated to follow Roku’s path, this layered chart suggests vastly lower prices ahead for Bitcoin. 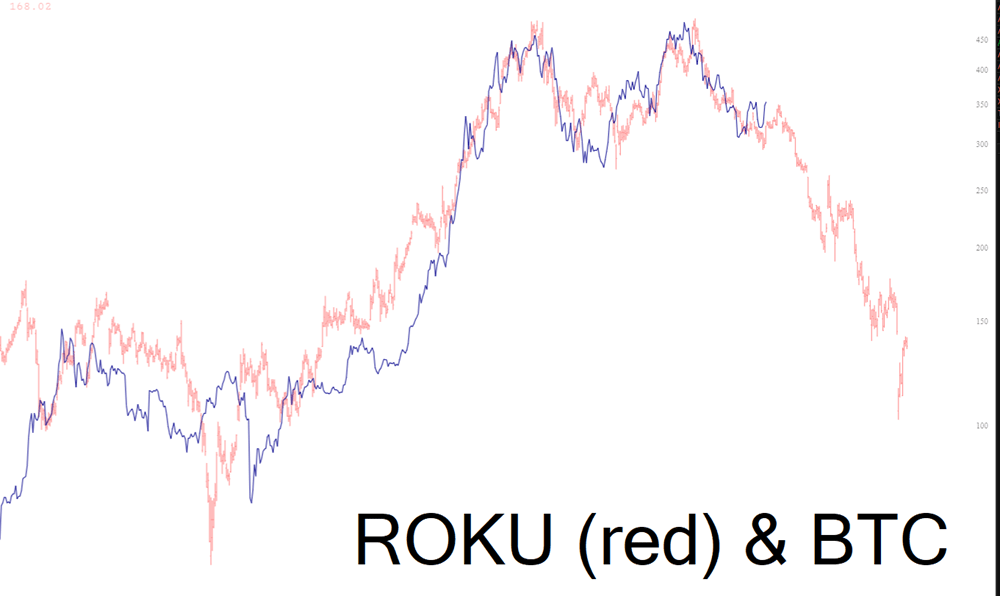 Here is the University of Michigan Consumer Sentiment index (light blue) overlaid with the SPY, representing the biggest U.S. equities, in dark blue. The plunging sentiment following Covid-19 suggests that equities may have some “catching down” to do. 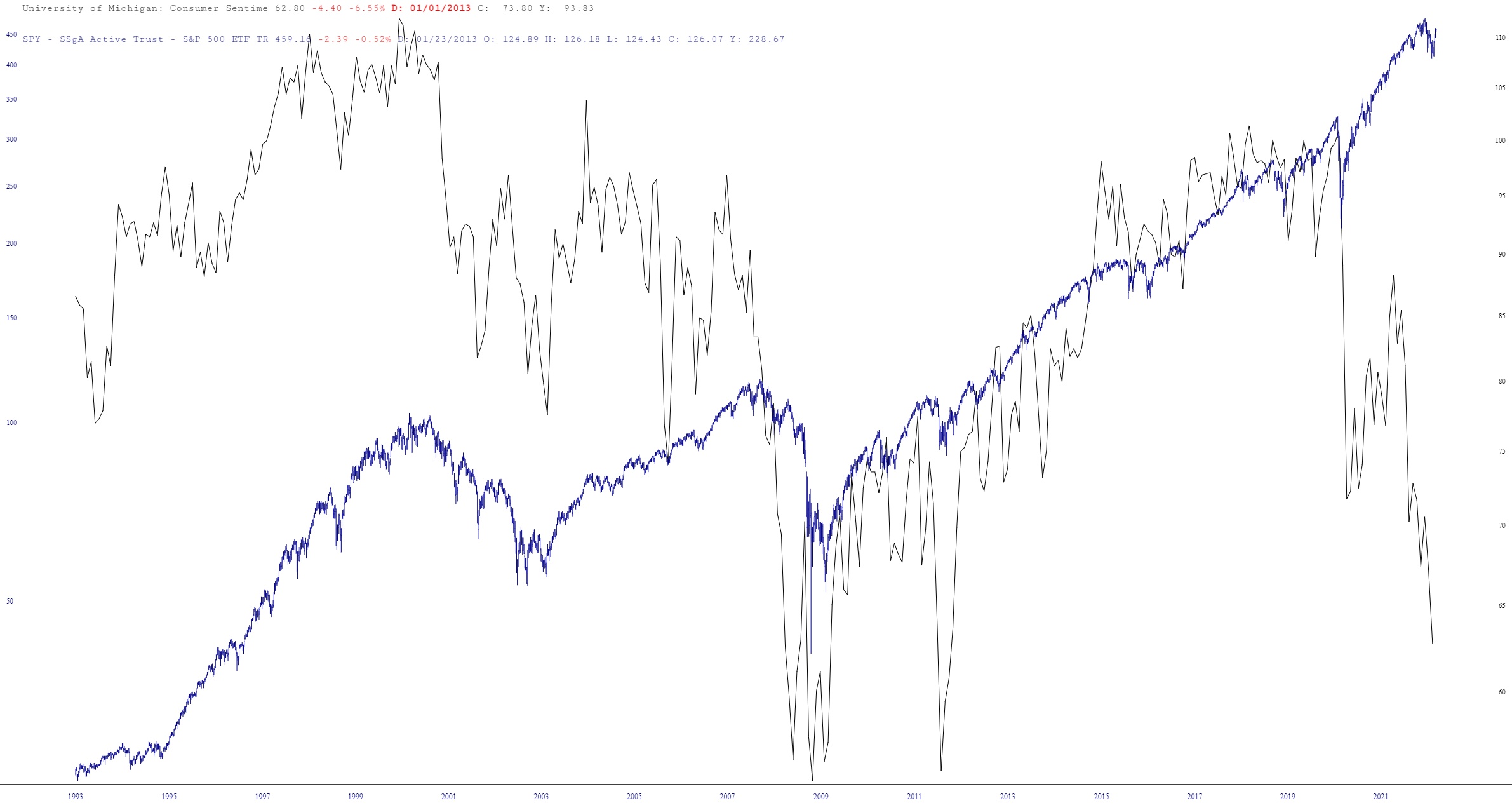 Finally, here is the running sum of advancing/declining stocks (light blue) compared with the SPY. The A/D summation peaked around June 2021, which is when, even if the actual reason (Fed bucks) wasn’t especially “healthy”, the behavior of stocks was the healthiest. That was the peak of Stock Health, even though the nominal peak in price took place a full seven months later! 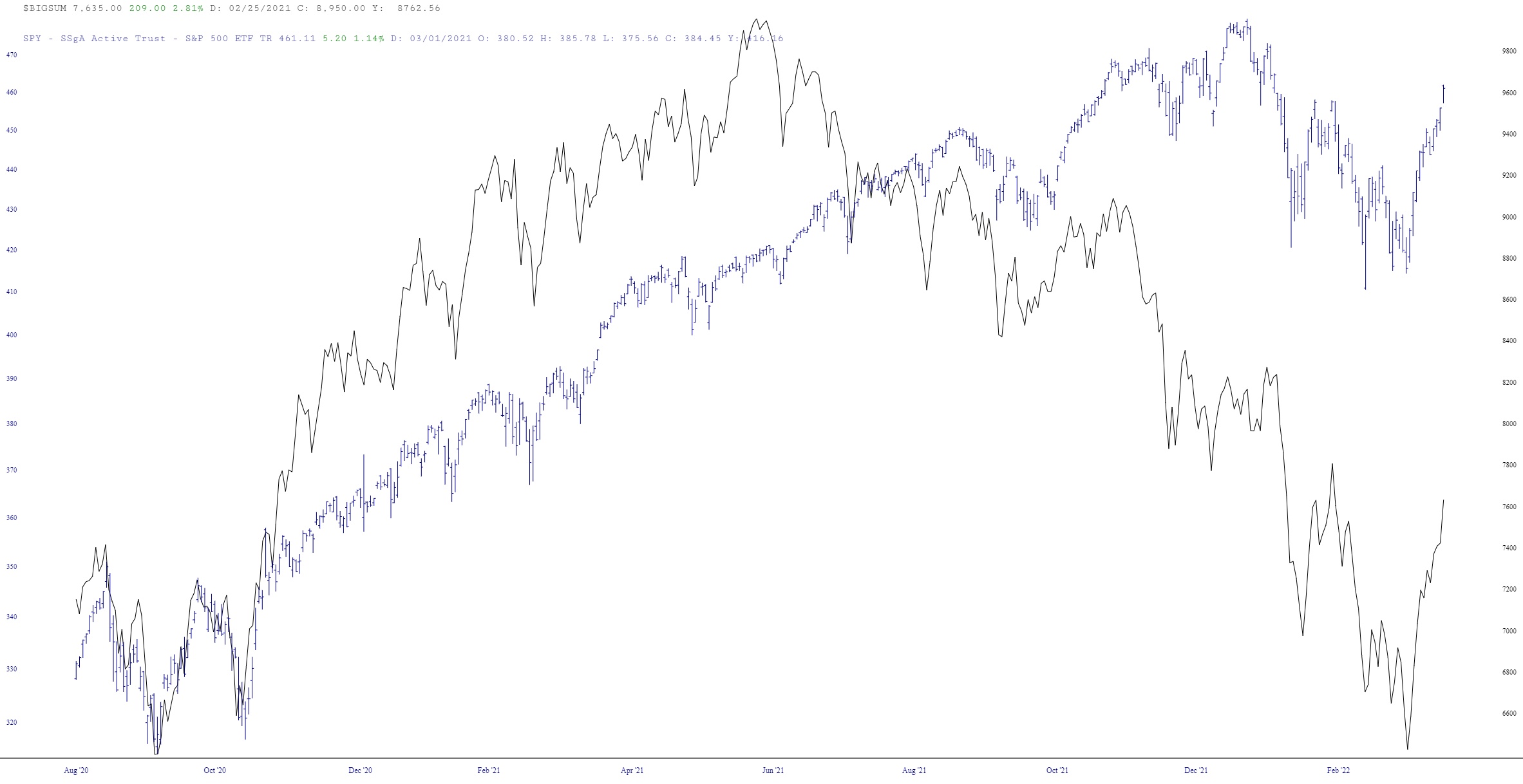