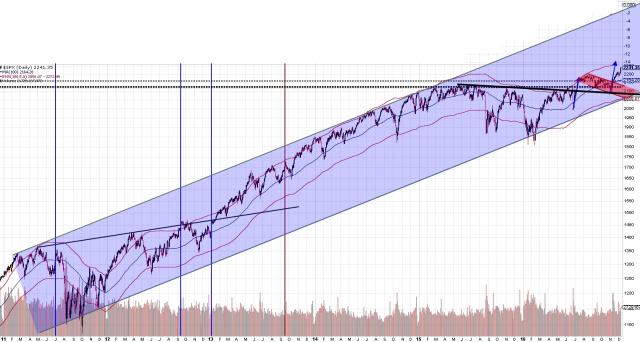 Closing Basis - go with the flow
I'm always amazed at how much clearer shorter-term price action becomes when you zoom out. Far too many traders get stuck in the extreme short-term charts and don't get the context within which they are trading.

So I have to ask myself. Is price just going to work its way back to the top of the channel? 12/8/16

Closing Basis - go with the flow
From this zoomed out perspective. SPY had a year long consolidation until it reached the channel low, then it broke out, consolidated in a BULL FLAG down to retest support and now we're off to the races. 12/8/16

Closing Basis - go with the flow
Are you paying attention? Price already above the August high. Secondly, there's no reason to doubt a bull flag until it actually fails. Second guessing new highs as they happen is a great way to lose money (I know because I did it for years). I hope you don't have any real money behind this baseless conclusion. 12/8/16

Dink
If you're only looking at trendlines and geometric shapes, then of course you won't be able to second guess new highs. However, if look at what is actually happening underneath price, via analyzing volume and price spread, then you would understand that distribution has been taking place since early November. I don't blame you for not understanding this more advanced form of technical analysis. Most people don't understand it. 12/8/16

Dink
So I looked at your bio. Like most amateur traders/retail traders, you believe that paper trading is the way to start. While I am not going to push my own views on you, as you tried to do with me in your comments above, I will tell you why I strongly disagree with paper trading. Have you ever played Poker for fun without money? Have you also played poker for real money in a casino? If your answer to both of these questions is yes, then you must know that there is a difference in your actions and responses when money is on the line. Paper trading is completely worthless and if anything actually hinders your development as a trader and skills at money management. I'm not saying put all of your life-savings on the line in a trading account, but at least have some consideration and stake in the game. If that only means $1,000 then fine. You have to have some amount of money on the line or else you are not learning anything about gains/losses. That is of course just my opinion and maybe it isn't right for you, but it's what I believe. By the way, like you I've read Van Tharp and while I would recommend his books to anyone looking to trade the markets, there are also parts of his book that I strongly disagree with. He recommends taking the focus off the entry and to focus on exit and money management. That is of course important, however the exit and money management aspects are very strongly dependent and influenced by one's entry. Basically Van Tharp is appealing to those who have given up focusing on entries because they failed at finding a good entry strategy. He is right that too many people focus on entry alone, but it is just as important, if not more important than exit and trade-management. 12/8/16

Closing Basis - go with the flow
Re: paper trading. I agree that our psychology comes into play more when money is on the line. What I personally believe about it is that if we can't profit when real money isn't on the line, what makes us think that we will profit when we complicate matters by adding real risk and the emotions that come with it? I figure, better to prove profitability first. Then if profiting changes after switching to real money and risk, then we know the problem is in our psychology and not in our system (assuming we haven't curve fitted it to death).

Re: Van Tharp. I agree that entry is important, but with sound money management practices, one could use a random entry and still profit if the exits are being managed well. I believe that is the point he was making.