I was hoping to put this post up a bit earlier, however the allure of NBA play off finals has kept me at bay. The current type of powerful rally is very healthy when seen post major market lows, like in 2003 and 2009. Market tends to rally hard out of extremely oversold and overly pessimistic conditions as it mean reverts to equilibrium (if there is ever such a thing with human emotions involved).

However, the market has entered a blow off terminal phase of the bull market.

The Federal Reserve is now fully aware that they have created yet another bubble.

There have been only a handful of rallies with similar vertical gradient over the last two decades, mainly during the tech bubble euphoria of the late 1990s. During periods like these, sentiment becomes almost irrelevant. It doesn't matter really what indicator says what... until one day it does.

On the other side of the spectrum, precious metals bearish sentiment is on a record breaking run. Week after week, we see either lower sentiment surveys or lower positioning via the COT report (especially link to the small speculator space).

This weeks AAII survey levels came in at 41% bulls and 27% bears. Bullish readings rose rapidly by almost 10%, while bearish readings fell by 8.5%. With the market rising vertically in recent months, AAII sentiment levels of retail investors have remained decently subdued. While bulls believe this is a sign of even higher prices to come, majority of the other sentiment surveys discussed below do not confirm AAII's message.

Chart 1: Bears are non existent in the advisor community 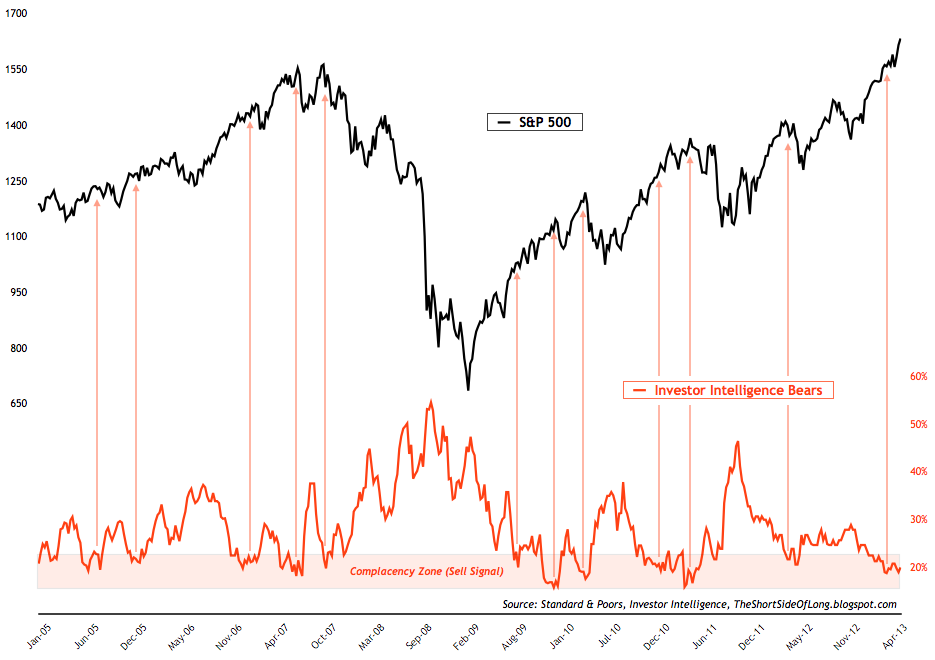 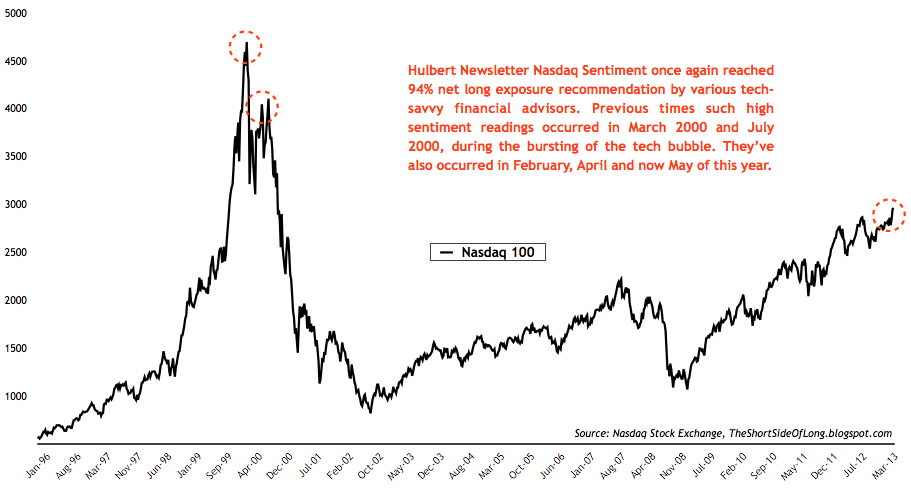 Similar to last weeks update, majority of other sentiment surveys I follow are still signalling overbought market conditions. Consensus Inc survey remains at extremely elevated level associated with previous market tops. Market Vane survey also remains at extremely elevated level of 69%. Intermediate equity market peaks in February 2011, March 2012 and September 2012 were at the same level. Hulbert Newsletter Stock surveys have once again jumped to near record high exposure territory. In particular, Hulbert Newsletter Nasdaq Stock Index is once again back to 94%, as can be seen in the chart above. Previous readings of this magnitude have been associated with "irrational exuberance" peak in the technology, media and telecommunication bubble during the year 2000.

Chart 3: Retail investors flock into stocks at the end of a rally 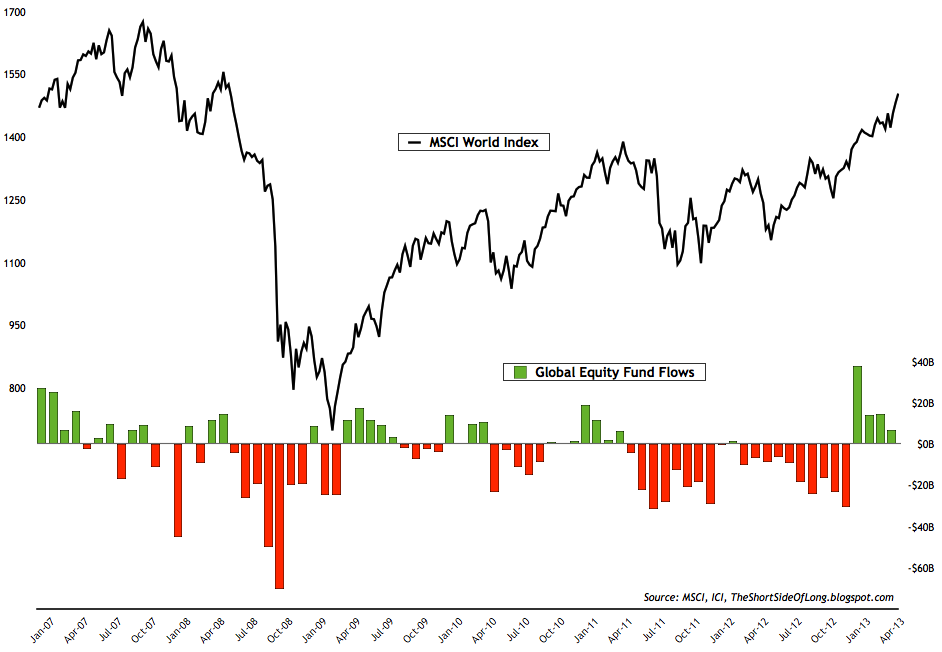 Earlier in the week ICI did its latest fund flows report. According to the company equity funds had estimated outflows of $4.37 billion for the week, compared to estimated inflows of $1.33 billion in the previous week. Retail investors continue to flock into the equity markets at the fastest quarterly pace since early 2007. It is usually not surprising to see retail community join the buying frenzy at the end of a bull market and after missing all of the last 100% gain out of March 2009 lows. Confirming this data is the Rydex fund flows tracked via Nova Ursa funds, which also continues to show large amount of bullish bets and extremely small amount of bearish bets.
Latest commitment of traders report showed that hedge funds and other speculators continue to hold an extremely high net long position on technology stocks. This weeks contract position came in at over 130 thousand net longs yet again, which is close to record highs. Last weeks chart can be seen by clicking here. 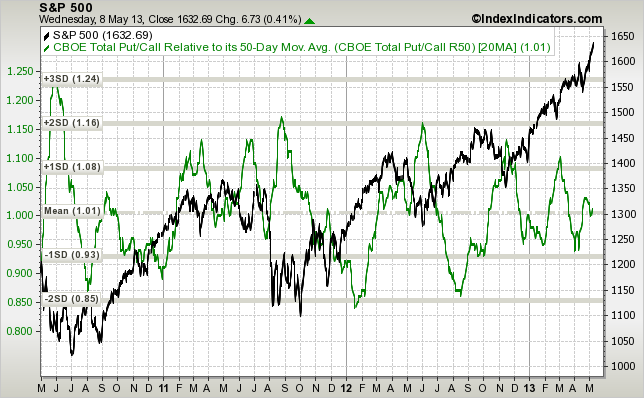 Source: Index Indicators Option positioning, shown in the chart above, sits dead smack in the middle of range for the last three years or more. From a contrarian point of view, a sell off in price and a potential bottom is usually accompanied with large put buying as seen in May 2010, August 2011 and June 2012. However, investor positioning is not always at the other extreme end, when it comes to market peaks. Historical data shows many occurrences where large put buying was present near market peaks, including during February to July 2011 seen in the chart above.

Bond sentiment surveys are continuing to recover from their recent troughs. Consensus Inc survey has rebounded from extremely pessimistic levels few weeks ago, towards more neutral levels. Market Vane survey is still in the neutral territory. Hulbert Newsletter Bond survey is approaching extremely high optimistic levels, as can be seen in the chart above. All in all, sentiment on Treasuries isn't overly extreme, but the asset class remains extremely overvalued after a 31 year bull market. Commitment of traders report showed that after several months of holding some of the largest net short positions on Treasuries, small speculators are now positioned more towards the neutral side. If we look at the basic technical analysis of the chart above, we should be able to notice that we are currently posting a first lower high. Has the bond market rally finally peaked? In the recent newsletter posted on last week, I advised those holding bonds not to chase the prices any higher from current levels, as the 31 year secular bull in bonds remains extremely overvalued (I am repeating this important point once again). Commodities
Chart 7: Hedge funds exposure remains near 2009 lows 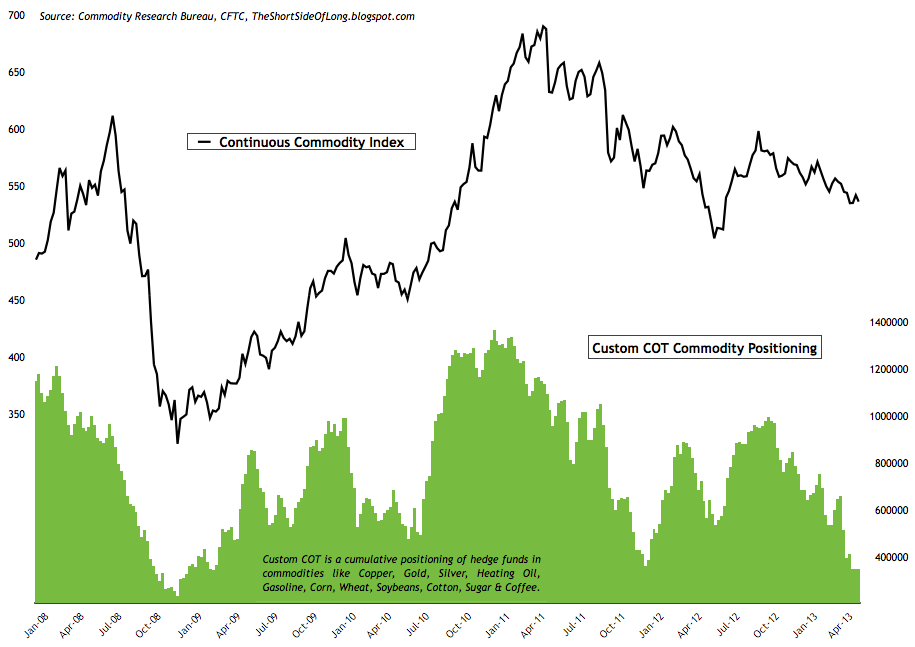 Latest commodity commitment of traders report showed that hedge funds and other speculators hold extremely low exposure towards commodities. Investors held over 1.3 million net long contracts in January 2011, with prices peaking in late April 2011. The twenty four month bear market has reduced those positions to some of the lowest levels since Match 2009, currently at 347,000 net long contracts. Note: My own personal Commodity COT Indicator takes into account various commodity positioning from Energy, Agriculture and Metals sector. It only focuses on COT reports which correlate closely to the price and excludes other which do not.
Chart 8: Investors are particularly bearish on Agriculture 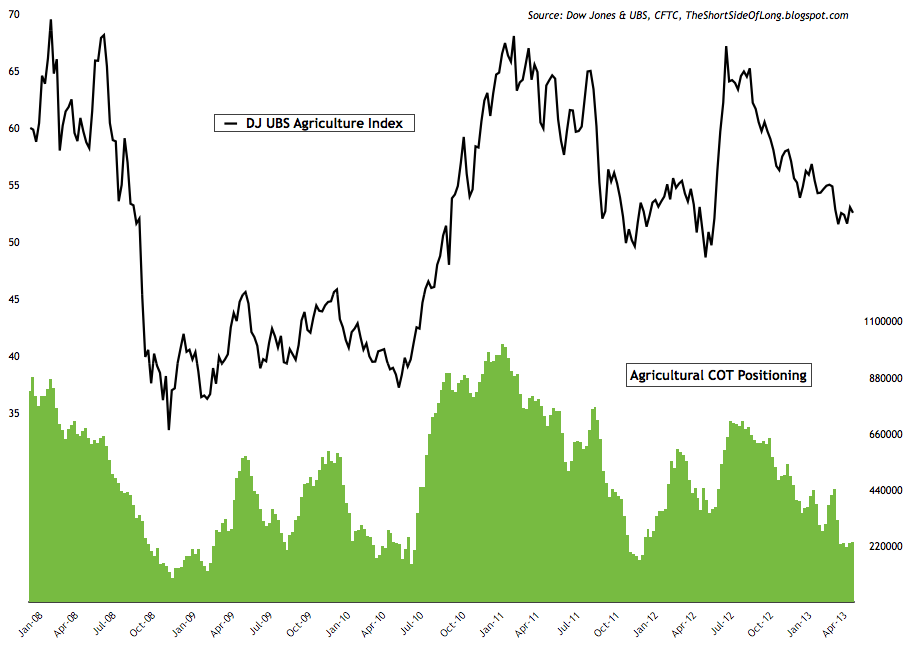 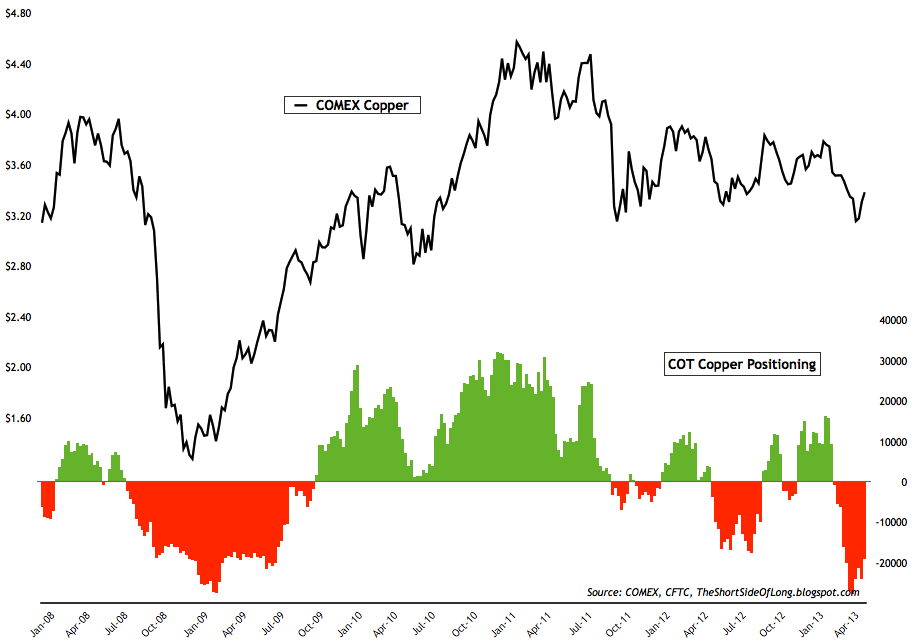 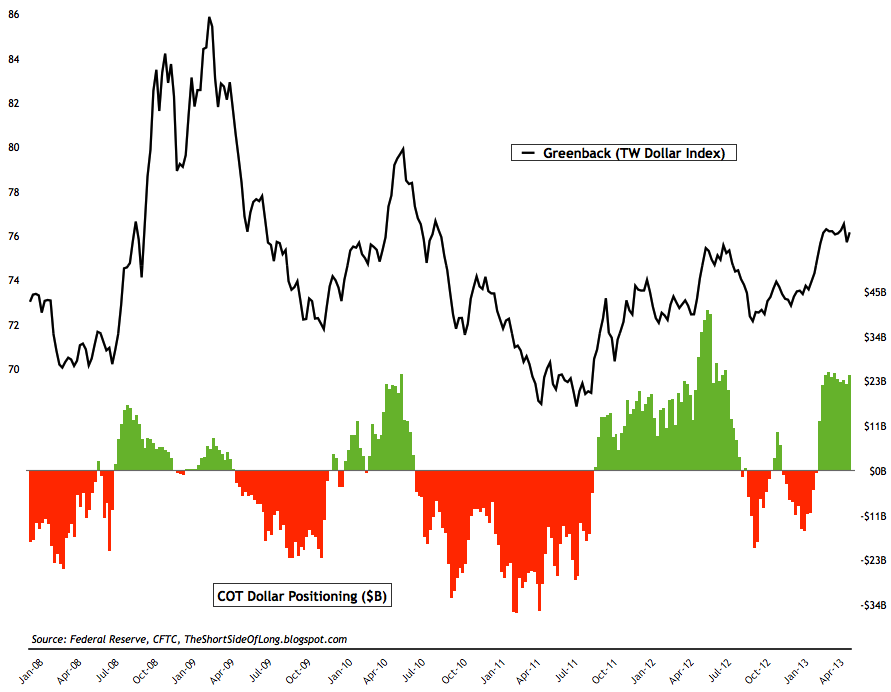 Chart 11: Speculator positioning on the Pound is extremely low 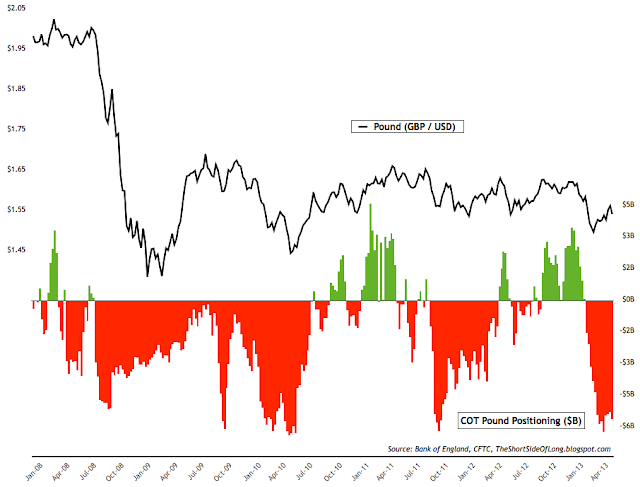 Currency Public Opinion survey readings on the US Dollar have been extremely optimistic. As explained last week, this has mainly been a result of ongoing pessimism towards the European Euro and the Japanese Yen. Sentiment levels on the Loonie have risen sharply in recent weeks. 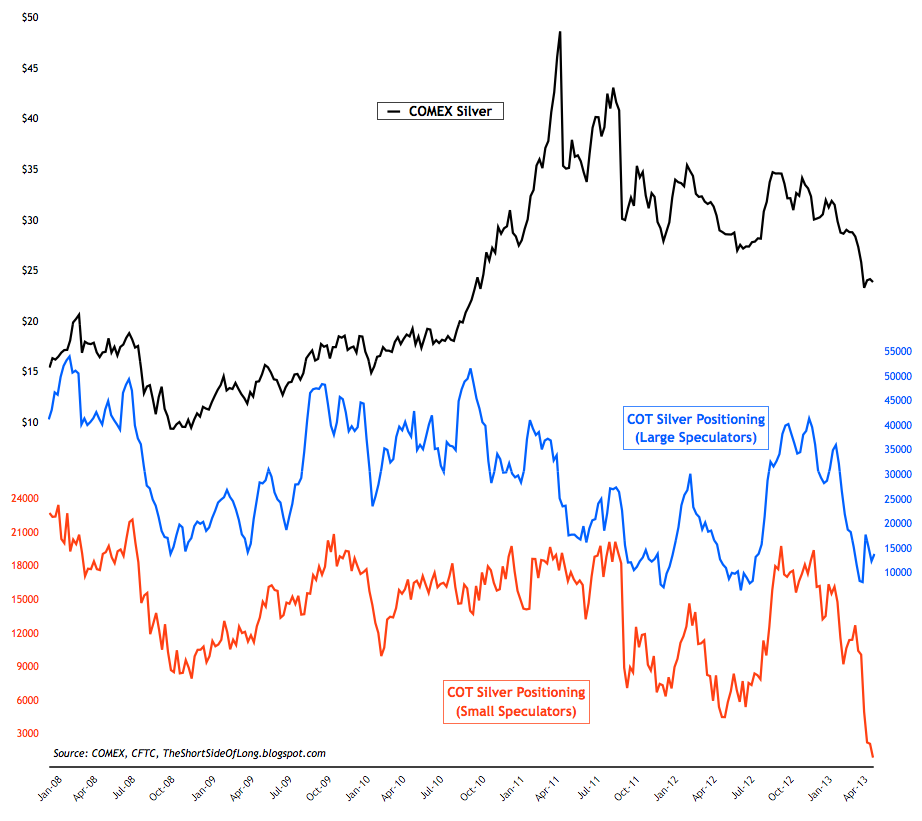 Alternative currency commitment of traders report showed hedge funds and other speculators continue to cut their net long contracts even further then last week. In Gold, non commercial positions have fallen below 90 thousand for the first time since late 2008, while small speculators remain net short for the first time since 2001. Last week I discussed the ever so low small speculator positioning in Silver (chart above). Well, this week it turns out small specs have turned even more bearish, setting a new record low positioning!
Public opinion on alternative currencies like Gold and Silver continues to remain near extreme pessimism, despite a rebound in price.