This is worth mentioning, from earlier today: The BEA released the Personal Income and Outlays report for April: 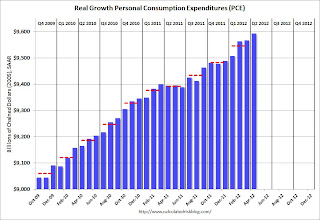 This graph shows real PCE by month for the last few years. The dashed red lines are the quarterly levels for real PCE. You can really see the slow down in Q2 of last year. Even if May and June are flat compared to April this year, real PCE would increase around 2% in Q2.

Another key point is the PCE price index has only increased 1.8% over the last year, and core PCE is up 1.9%. And it looks like the year-over-year increases will decline further in May.

Also the personal saving rate declined to 3.4% in April.